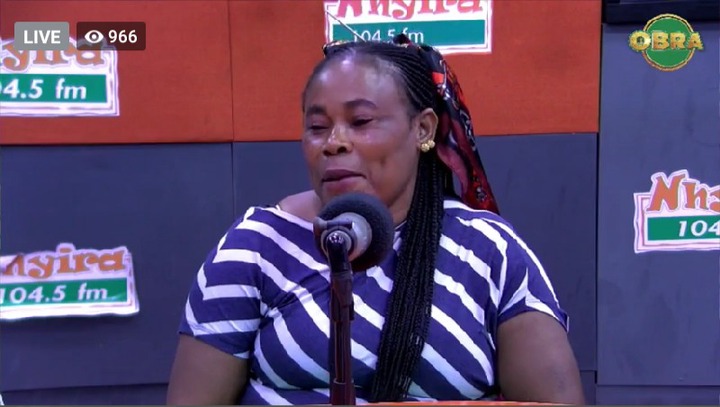 A woman named Yaa Abrafi shares why she has decided to let her daughter's boyfriend to pay back all the money she spent to sent her daughter to school. The woman voiced out that after her daughter named Ama Comfort completed Junior High school, she told her that she will not further her education but she would like to learn hairstyling.

She then advises her to complete Senior High School before she will go to learn the hairstyling. The woman said she spent a lot of money on her daughter before she went to school but her daughter didn't display any good behaviour at the school. Abrafi said she even got fed up with her daughter's behaviour.

When Ama was in her second year, she came for vacation but went out with her junior brother. The little boy came home alone in the evening but Ama didn't return home. She tried to call her daughter but didn't respond to any of her calls. Her daughter didn't come home back for one whole week. She went to the police station to file a complaint about her missing daughter.

She called her days later but a man who was staying in their neighbourhood picked up her calls. She was surprised because the man has got injured and he is receiving treatment at Dunkwa. She went to the man's house to inform his parents. They found out that her daughter has made divert calls for him to receive any calls she gets. The man helped them to find where her daughter was staying.

Truly they found her daughter in a man called Manu's house at Kokoben. After they went home, she sent her to the hospital to do a pregnancy test but the test kits indicated that she is not pregnant. Abrafi said when she got home, she found out that Ama's physical appearance indicates that she is pregnant. She went to buy the pregnancy test kits herself to test her urine.

The test kits indicate that she is pregnant, they called Manu to inform him and he accepted the pregnancy. When both families met, he promised to help Ama go to University when she complete the Senior High School. The mother continued that Ama told her that she will never go to school but will marry Manu. The woman said she wants her Manu to pay back the money she spent to send her child to school before she will allow them to stay together.