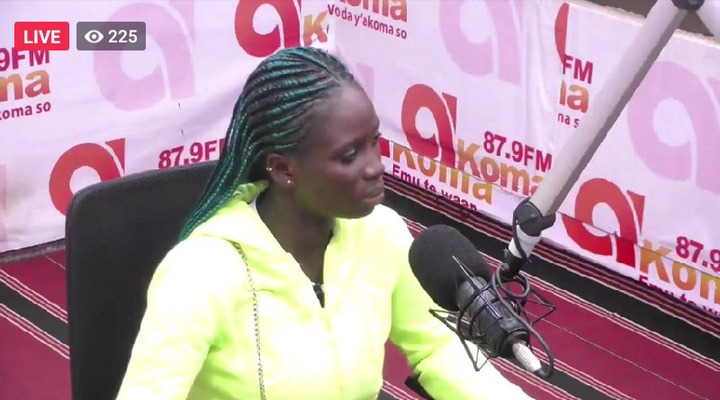 A 22 years old lady named Annette Kwarteng in an interview shares what happened between her parents after they gave birth to her. According to the lady, she has been staying with her mother alone all these years. But she was surprised that her mum didn't give her any chance to meet her biological father. One day she asked her mother about the reason why she don't want her father to take care of her.

Annette said her mother then revealed to her that there is a curse between them that's why he can't even come near her. The lady added that she used to take money from her father's friends but all of them didn't tell her anything about her biological father. When she was 9 years old, her biological father named Prince came to plead with them for forgiveness.

They decided to go to the river and perform rituals to reverse the curse but they were not able to pay the amount of money the fetish priest requested before they can perform the rituals. A few months later her mother too fell sick. Annette said she started learning hairstyling, life was not easy for her, and getting food to eat was very difficult for her. One day she met a man who proposed to her.

Looking at her situation and the problems she was going through, she accepted the proposal because she thought maybe the man will provide her with money and other things she needs. Unfortunately for her, she got pregnant a few months after she got into the relationship. The man took care of her until she gave birth. Annette said although her father is a manager who earns much from his work but he has never given her money since her childhood.

Annette again said she has been having sleepless nights and she always see a fetish priest who calls her to go to him, the lady came into a conclusion that she wants her father to start taking care of her. According to Annette's mother known as Adwoa Sika, she was 18 years old when she got pregnant with Prince but after she gave birth, Prince didn't pay for the hospital bills, it was her Auntie who paid these bills for her. The woman said her Auntie put her under pressure to pay back her money.

Prince too was not willing to pay back that money, this issue brought a misunderstanding between them, they had a meeting concerning the hospital bills, but Prince insulted them that they are all villagers and he doesn't know her. She painfully invoked a curse on Prince for insulting them. Since that day she didn't see him again, she struggled to take care of her daughter but she too fell sick years later and was not able to continue taking care of her daughter.