There is nothing new under the sun, I have come to believe. Whatever is going on in our time was going on before we were born. Lina Medina, a Peruvian girl, set the first record for the youngest mother in 1933. Lina shared a home with her parents and nine other siblings. Tiburelo Medina, a silversmith, and Victoria Losea were her parents. 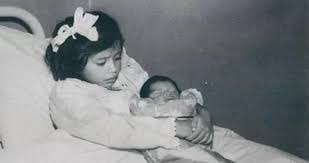 Lina's parents took her to the hospital one day, believing she had an abdominal tumor because her stomach was larger than normal for her age. The doctors ran their tests at the hospital and discovered that the five-year-old girl was seven months pregnant. Lina's story went viral, attracting media from all over the world who wanted to make a documentary about her because she was the first 5-year-old girl to become pregnant.

Lina was unable to give birth naturally due to her narrow pelvis. Three doctors performed the cesarean section on her, with one of them administering anesthesia to the young child. Because of her early puberty, Lina's sex organs were discovered to be fully mature.

Medina's son was raised to believe Lina was his sister, but when he was ten years old and her mother was fifteen, he discovered the truth. Lina's failure to identify the father of her child resulted in her father's arrest for having slept with her own daughter. He was eventually released from jail after no evidence against him was discovered.

Lina's son died of bone marrow disease at the age of 40. In 1972, his mother remarried and had another son.

“Nsawam Prison Officers Allow Us To Put Narcotics In Our Anus To Sell”— Former Prisoner.

Weird Punishments Thieves Suffer In The Name Of Mob Justice