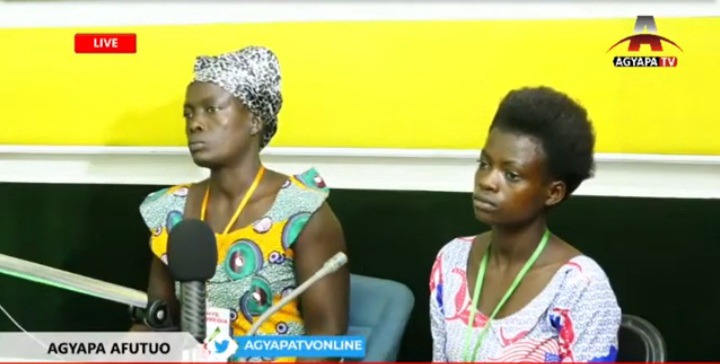 Auntie Yaa Maggie, a mother from Juaso in Kumasi revealed how a young man slept with her daughter in her room after she travelled for a funeral. According to the woman she rented a room for her daughter called Sandra Darko when she got admission in the senior high school. Because of the better future she wants for her daughter, she advised the young girl to focus on her education but she didn't listen to her advice.

The woman said when Sandra returned home on vacation, she realized that her daughter is pregnant. She became sad about how the young girl has destroyed her own future because of man. Sandra then revealed to her that their neighbour called Aikins impregnated her, the woman cliams they went to meet the young man's family members and had a discussion about the pregnancy.

The young man's family members accepted it and agreed to compensate them with Ghc1500. Although the young man looked after her daughter but two months after giving birth, Aikins secretly came to their house at night and slept with her daughter without her knowledge. She got angry with them when she found out about it but she advised Sandra and the young man that it is not good for her to have sexual encounter at that period.

She thought that her daughter had followed her advice, but after she had gone to a funeral, the young girl invited Aikins to their house at night and had intimacy with him in her room again. Auntie Yaa said she was very upset with Aikins that day, but she didn't say a word to him and went quietly to her farm that day. When she got home, the man's family came to tell her they wanted to live with Sandra because the young girl has accused her of trying to sack her out of the house which was not true.

She thought it was just an accusation but her daughter boldly packed her belongings and went with them. A month later, she regretted letting her daughter to stay with the young man so she brought her home but since that Aikins has neglected her daughter and he doesn't want to take care of the child anymore. The woman is asking the young man to perform his duties by taking care of his child.