By Noble_Eugene (self media writer) | 1 month ago

At just 23 years old, Alexandra Kenova thought she knew where her life was heading. She had a loving boyfriend named Anthony who she loves dearly. Alexandra and her lover, Anthony, always dreamt of having a big family someday. But the couple didn’t expect that it was going to be this soon. They assumed that they will have time to prepare their home and lives for their kids before they expand their family. But Alexandra got pregnant sooner than the couple expected. She got pregnant with twins, or so she thought, before an ultrasound revealed the shocking truth.

Day in, day out, Alexandra’s belly just seemed to be getting bigger and bigger. And before she knew it, the size of her belly became enormous. Alexandra later went in for another ultrasound and the doctor revealed some news that changed the lives of the couple. 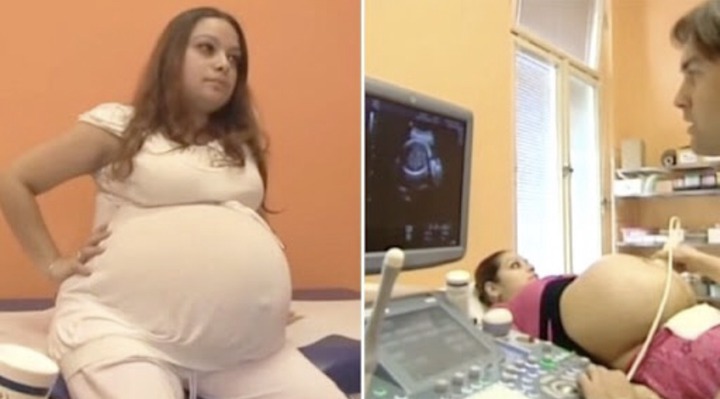 This was the second time Alexandra had got pregnant. She expected her second pregnancy to be a breeze, since she had already had a trial run with her first pregnancy. Both Alexandra and Anthony’s family had a history of twins in their genetic makeup, so they were not surprised when the first ultrasound revealed that they were going to have twins. But when she went to her doctor for the second ultrasound, she got some news she never expected and even the doctor was shocked by the results of the ultrasound, which included something that happens one in a million chance.

Well, the results of the ultrasound proved that she was pregnant with more babies than just twins. But the actual number of babies in her womb could not be determined. Due to the way multiple babies are positioned in a mother-to-be's womb, it is difficult to know the actual count of babies in the womb. The doctors told Alexandra that she was not going to have twins, but she might give birth to triplets or quadruplets. Though the actual number of babies were not known, the doctors told her to expect 3 to 4 babies and the size of her belly was evidence. Alexandra had no option but to wait till childbirth to find the actual number of babies and their genders as well. Finally, the day for childbirth came and a Caesarean section was performed on Alexandra to get the multiple babies out. Surprisingly, she gave birth to 5 babies who were all healthy and in good condition. She gave birth to 4 boys and 1 girl.

Today, Alexandra and Anthony are living happily with their 4 baby boys named; Daniel, Michael, Alex and Martin. And the only baby girl which they named Teresca. What a wonderful turn out of events.