By WesstPatty (self meida writer) | 24 days

Evening approaches. Sounds of buzzing insects, warbling birds, and screeching monkeys surround us. But, listen! Menacing, hoarse growls filter through the trees. Then ominous silence. Scampering animals and whizzing ground birds scatter. Now another round of deep snarls, as terrifying as a lion’s roar! A robust male jaguar emerges. 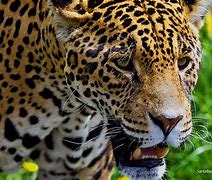 This is his realm—riverine jungle and swamps. Of all the big cats, the jaguar is the one most at home in water. In fact, it needs water both for fun and for business—fishing business that is. Off he goes to his fishing ground across the river. He paddles deftly in an almost straight line, all the while holding his head, spine, and the tip of his tail above the surface of the water. Jaguars are excellent swimmers, they swim so fast that they make bow waves. 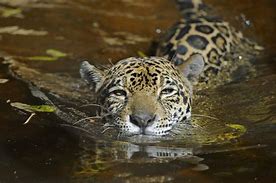 When the jaguar reaches the opposite bank, he climbs out and shakes the water off his body. He crouches on a log overhanging the river, fixing his eyes on the water surface as if he wants to pierce the depth below. Then, with lightning speed, his sharp-clawed paw scoops out his finny prey.

Jaguars are incredibly strong! The jaguar is not only strong but also versatile. It is a hunter in three environments, adept in water, on land, and in the trees. When wading or when climbing trees, its claws provide sure footing, like the spiked shoes of a mountaineer. On land it retracts its claws and moves as if walking on sound-dampening socks—great feet for stalking. 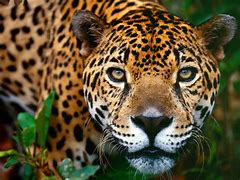 But a hunter also needs patience, speed, and timing. No wonder it takes two years of motherly training before young jaguars can fend for themselves! After six weeks young cubs will follow their mother around. However, they remain hidden in thick cover while she goes after game.

Cautiously, she moves along the river’s edge until she detects a group of capybaras, the world’s largest rodents. With timed movements she inches forward, then pauses, eyes fixed on the quarry. Her entire body is motionless, only the tip of the tail twitching. But sensing her presence, the capybaras dive under water. Defeat, however, is rare for the jaguar. In fact, the cat scores so often that the capybara has been called “the jaguar’s daily bread.”

Side dishes? There are plenty. From small agoutis to bulky tapir. Even porcupines, turtles, and caimans are not safe. Occasionally, the cat even looks beyond the forest into the pastures. But these attacks mostly involve old jaguars ousted by younger rivals or animals suffering from old shotgun injuries.

What of jaguars attacking man? “No, that must be rare,” says the animal doctor. Biologist Teunissen concurs. He recalls walking along the beach one night while assisting in a sea-turtle research project. When he returned, his flashlight revealed jaguar paw prints pressed on top of his own footprints. A cat had been following him! Instead of doing him harm, the cat vanished as soon as the biologist backtracked.

For the time being, though, we enjoy a relative abundance of these magnificent animals. And let us hope that it stays that way. Otherwise, the day may come when the elusive spotted cat will not be seen anymore.