By MohammedKarfo (self media writer) | 1 year ago 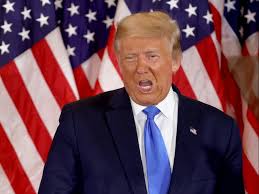 The United States of America went to the polls last Tuesday 3 November, 2020 to elect their President for the next four years to come.

Many people across the world followed the US elections. Everything went on successful.

Counting of the ballot begin and Mr. Joe Biden took early lead and he held on to the end. He kept on leading as the votes comes in.

President Donald Trump has come under heavy criticism from the opposition and masses.

Yesterday! Donald Trump said it in his Twitter post that, 71 million votes is enough to win him the Presidency again for another four years.

Donald Trump before the election, said he will not accept the outcome of the elections if he is satisfy with the process. He said there was a lot of irregularities in the counting of the votes.

President Donald Trump preparing to go to court tomorrow, to seek for justice according Donald Trump and the entire Republican.

Donald Trump try putting an injunction on the counting of some States, States like.Michangan, Arizona.

The out going President seems be very much surprise at the results so far.

Content created and supplied by: MohammedKarfo (via Opera News )