Latest Rank of 10 African Countries With The Most Coup D'etats

By Currentworldnews (self meida writer) | 8 days

Since the beginning of time, humanity have always want to control others, first taming the animals, conquering the sea and their own species. Following the recent Coup in Guinea, it's important to take a look at 10 African countries with the most Coup since 1952.

What is a Coup D'état?

The term "coup d'état," which translates as "stroke of the state," originated in France in the 17th century.

A Coup d'état means coordinated efforts to overthrow a government in power and install its replacement. It typically originate with small, elite groups already within the government.

1. Sudan: They lead with 15 coups. The removal of former president Omal - al- Bashir who took power in in 2019 was the recent one. The then time head of state Bashir, also took power through military coup in 1989.

2. Burundi: The East African country is 2nd on the list of African Countries with the most coups. The coups are constantly driven by the Hutu and Tutsi. The recent was 2015 Burundian coup d'état attempt which failed.

3. Ghana : The West Africa nation has had 10 coups. They are third, tied with Sierra Leone.The most popular coup in Ghana's history is June 4 (1979).The recent successful coup took place when J. J Rawlings again overthrew Dr. Limann on 31 December 1981.

5. Comoros: They are 5th country in Africa with the most Coup d'états. They have had 9 coups. The current president Azali Assoumani seized power through military coup in 1999 which has been the last coup for the country. 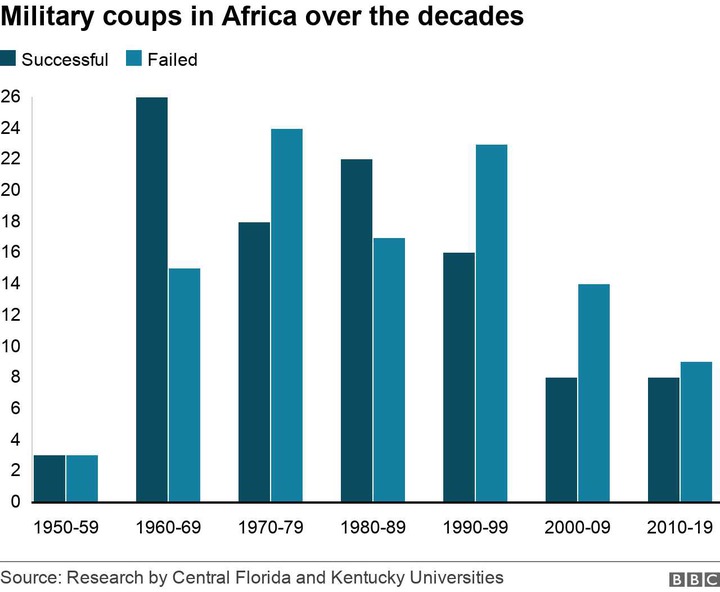 6. Mali: They also have 9 total coups. The most recent coup was on Tuesday, 18 August, 2020. They are fifth on the list with the same number of coups like Comoros.

7. Guinea Bissau: They are also 5th on the list. The latest coup was on 5 September 2021, when President of Guinea Alpha Condé was over thrown. They have 9 coups d'états in all.

9. Burkina Faso: They have had a total of 8 coups. The last successful coup was in 2015 with 11 deaths. The coup is considered as failed and the aftermath result in the dissolution of the president national security. They are 8th on the list tied with Nigeria.