Ghanaians Are Waiting For Dr Bawumia To Fulfill This Campaign Promise 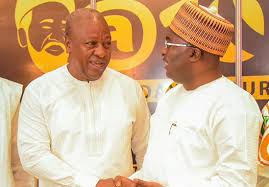 Following the campaign season, Politicians were making a lot of promises and some of them too were doing a counter promise from their opponent.

The vice president of Ghana, Dr Alhaji Mahamudu Bawumia in the campaign time last year made a lot of promises to Ghanaians and Ghanaians were questioning him, if he will be fulfilling them on time or it's just a political talk.

Former President John Dramani Mahama and his party, the National Democratic Congress in the Campaign section brought in a controversial campaign message that caught the attention of Ghanaians and nearly put NPP in trouble.

That Major promise was the okada (motor) legalization promise when John Mahama went to Volta Region to promised okada drivers that he will legalize okada for them so that they can operate fully.

In return from a counter promise, NPP and Dr Bawumia jump in with another promise stating that they will adopt new style for okada drivers, and if you have a motor bike or another old vehicle, you can come and swap it if voted for because NDC and Mahama's plan is not great enough and really, they have won the election too.

Leading to that Ghanaian on facebook has stated that they are waiting for Dr Bawumia to fulfill his promise on okada swap and he has bought 5 okada already waiting to swap it for the cars promised.

"When President Mahama promised the legalisation of OKADA, this is what Bawumia told Ghanaians as a counter promise.

I have bought 5 OKADA’s, so I'm waiting to swap them for brand new vehicles oooo" he said today hoping that It will happen.