The people of Kasoa Ayigbe Town calls out on the district assemblies and government to provide them with speed-ramps and traffic lights on their roads to reduce the rampant killing of people on the roads. 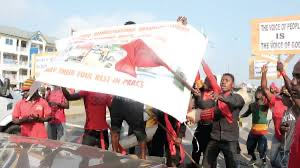 On 28th August 2019, some residents of the Ga South and Weija-Gbawe Municipalities poured onto the streets in their numbers in solidarity with the Concerned Landlords of Ayigbe Town Association (CLATA) to protest against what they termed as "rampant accidents and knockdowns" on the Accra-Kasoa-Winneba Highway. According to them, the lack of traffic lights, road humps, zebra crossings and poor visibility resulting from non-functioning street lights had led to an average of about 10 knockdowns every week, a situation they said was fast killing their people and depriving them of many of their youth. They took to the streets at about 6:30am wearing red attires and red head and armbands to register their displeasure about the frequent knockdowns and to demand that the authorities move in to curb the situation. Some protestors carried banners with the pictures of some of the alleged victims who had died from the accidents and knockdowns and inscriptions such as, "Authorities, please rescue us from perishing on the Kasoa-Winneba road for the blood on the roads are too much."

Others also held placards some of which read: “Where is the tollbooth money”, “The voice of the people is the voice of God’, “Mr President, please care for the dying, we are suffering too much on Kasoa-Winneba road”, “No road signals, no traffic lights, no speed humps, poor roads” and “killing one person means killing thousands of people,” among others.

It’s been over a year and nothing has been done in relation to their quest. The people in the vicinity says that if the government doesn’t come to their aid, they’ll take the law into their own hands and do as they please.

Content created and supplied by: 360•Broadcast (via Opera News )