By CitizenJournalist (self media writer) | 11 months ago 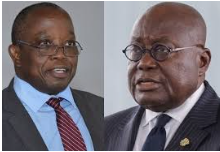 It would be recalled that on the 1st of June, 2020, the President of the Republic of Ghana, His Excellency Nana Addo Dankwa Akufo-Addo, by a letter addressed to the Auditor General directed the Auditor-General to proceed on an accumulated leave of 123 days with effect from July 1, 2020. 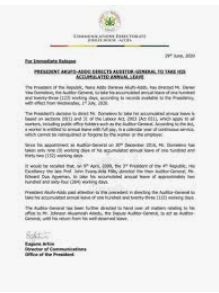 In the said letter, the Auditor-General opined that, with his knowledge of recent Labour law, a worker may decide to forfeit his leave and such forfeited leaves do not accumulate. He then cited instances of bad faith that motivated the president’s directive.

Furthermore, the president decided to double the punishment for Mr. Yaw Dumelvo, the Auditor-General, by “grounding” him for an extra 44 days for his “rebellion”: thus, from 123 days to 167 days.

The president's directive generated so much public debate about the president’ power to exercise control over independent constitutional bodies where some Ghanaian CSOs to submitted a petition to the President of Ghana urging him to withdraw his directive requiring Ghana's Auditor-General to take an enforced leave of absence of 167 days.

The petitioners describe the President's directive as “an unconstitutional and flagrant interference with the independence and mandate of the Office of Auditor-General,” and call on him to reconsider his decision as a matter of urgency.

Meanwhile the accumulated 167 leave for the then Auditor-General ends today 8th January 2021.

Moreover Ghanaians are asking as the president Nana Addo Dankwa Akufo-Addo has been sworn-in "will the Auditor-General be reinstated as his accumulated expire today.

ECG Closes Down Its Office In Krobo District

Haruna Iddrisu's view on E-levy is his personal decision, not that of the minority- Ibrahim Murtala