By Tinch (self media writer) | 9 months ago 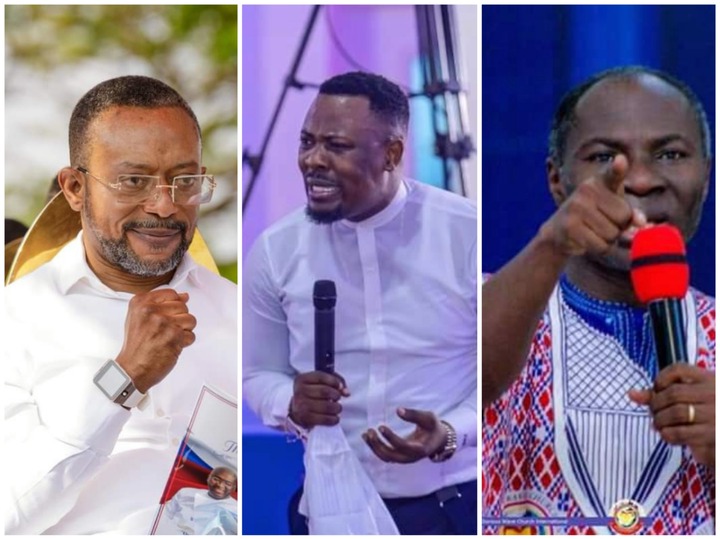 In the next couple of hours the auditoriums of some mega churchs would be flooded with people, many of whom are the curious among Christians and other fath who wish to learn of the prophecies for the coming year. It's a night of transitioning into 2021, and as it's been a tradition, many churches especially for the charismatic, prophetic and apostolic churches, do share some interesting and doom Prophetic messages about Ghana and other nations.

From politics to economy and other spiritual matters these prophets speak boldly about what they claim to be a message delivered onto by God. But for tonight, three prominent prophets will be on the radars of many Ghanaians. But then there would be some huge competition and counter prophecies among these three, given their stance demonstrated over the past months.

They are; Rev. Isaac Owusu-Bempah of Glorious Word Power Ministries International, Prophet Nigel Gaisie of Prophetic Hill Chapel, and Prophet Badu Kobi of Glorious Wave Church International. Yes, these people would be caught up speaking strongly on one common issue but would counter each. Latent events had given enough reason to believe Nigel Gaisie and Badu Kobi do have a common agenda or message or somewhat of what lies ahead of the nation after the 2020 election.

These personalities have singlehandedly been countered on their prophecies by Rev. Owusu Bempah, and this seems not to end anytime soon.

Whiles Rev. Owusu Bempah has been identified as a strong advocate and a spiritual defender of President Nana Addo Dankwa Akufo-Addo and his government, Nigel Gaisie and Badu Kobi had been quiet antagonistic.

Except for Rev. Owusu-Bempah, the two others had spelt doom for the nation after President Nana Akufo-Addo's victory in the just-ended election. They had threatened with some prophecies that the nation would end up in some difficulties if the incumbent is retained. Even after the election, these two had kept to their threats and 'theatrics'.

Tonight, it is anticipated that each of them would reinforce their positions on the matter of governance and the post-election matters.

Let's be reminded that Rev. Owusu Bempah did say a prayer cautioning forces that are plotting evil against the President. The Prophet who had been christened the "Nation Prophet" boasts that he is the 'spiritual eye' of the nation and that nothing would escape his glance.