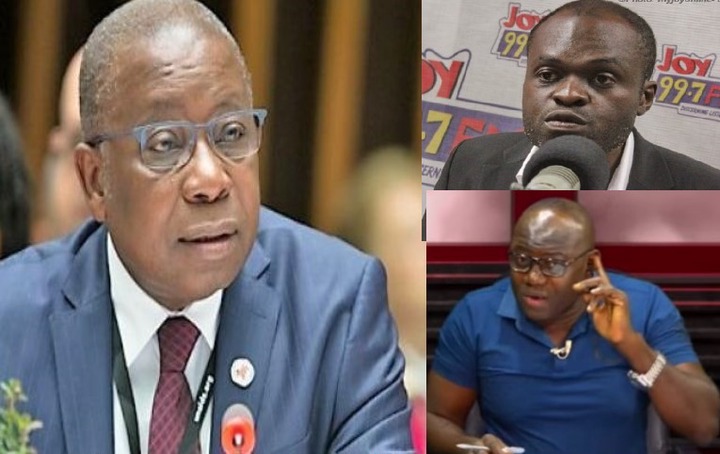 As pressure is being mounted on the President, H.E Nana Addo Dankwa Akufo-Addo to fire the Minister for Health, Kwaku Agyeman-Manu over the $2.8 million Sputnik V vaccine, a journalist is single-handedly threatening to mount a protest if he yields to the pressure. Host of the Seat Show, Kwaku Annan says he would risk everything to lead a protest against the Akufo-Addo government should the Minister be fired as a result of some ‘politically induced’ agenda against the government.

He argued that there is a grand scheme involving a private legal practitioner, Martin Kpebu and a group of journalists in the country who wish to have the Minister fired over the Sputnik V saga. Kwaku Annan stressed that there has been series of campaign that had been launched with that lawyer [Martin Kpebu] and those journalists including Manasseh Azure Awuni, Citi FM, and Joy FM to create disaffection against the current government.

He scored that its hypocritical of the lawyer to advance legal action against Mr. Agyeman-Manu when other rots documented in the Auditor-General’s report speaks ill about the previous administration [John Mahama]. Kwaku Annan argued that there is nothing dubious about the transaction that was executed by the Minister of Health in securing COVID-19 vaccines at a time when the pandemic was claiming lives.

Mr. Annan remarked that the Minister only bent some few rules given the crisis, and did not commit serious infractions to warrant his removal. He warned that the President confronted with a strong defense for the Minister if he ever acts on those calls by the lawyer and his cohort.

“I haven’t seen him win a case in any competent court in Ghana. He only advances argument on radio. Were you able to do that? This is millions of Ghana Cedis gone waste. Martin Kpebu where were you when Mahama’s government overlooked these infractions?

“Mr. President, should you fire Agyemang Manu, I will launch a serious protest against your government. Kwaku Agyeman Manu acted responsibly given the emergency. He only bent the law and did not break it. Has any money been stolen?”

Kwaku Annan cautioned the governing New Patriotic Party (NPP) for being lenient with such accusations, especially in prosecuting cases of corruption and financial malfeasances caused under the John Mahama administration.

“To hell with you guys. Time has come we speak the truth to your face. But I blame the NPP. If they had prosecuted and jailed them, this wouldn’t have happened,” he cried.

In his concluding remark, Kwaku Annan implored the President to ignore those calling for the head of the Minister and allow him to resume his work. He charged critics to find something worth condemning and prosecuting than Kwaku Agyeman-Manu’s case.

“With the greatest of respect, allow him to serve. He didn’t break any law. How about those who broke the law, and have been let lose?” said the host of the Seat Show.