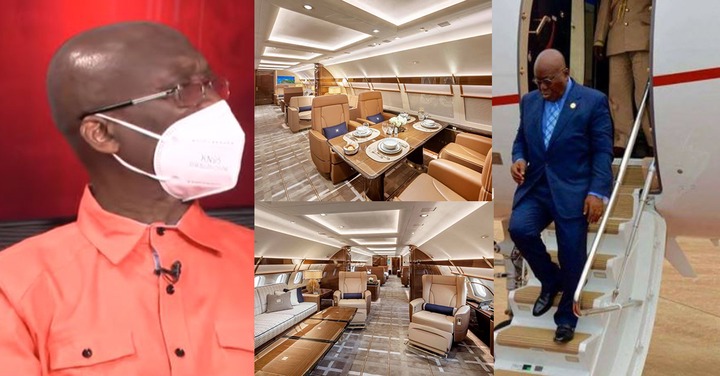 The allegations were made by the Member of Parliament for North Tongu Mr. Samuel Okudzeto Ablakwa. According to him, the President is paying £15,000 per hour whenever he uses an Airbus (ACJ30neo) owned by Acropolis Aviation in Farnborough, UK.

He says Akufo Addo has betrayed the entire nation by abandoning a presidential jet owned by Ghana for a rented one.

He brought images of the interior designs of the airbus and most Ghanaians have been wondering why the President would pay such an amount of money when there is a presidential jet in a good condition.

In a quick response on the Joy News File program, Mr. Kwaku Baako indicated that the issue is currently before parliament after an urgent question was raised by the Member of Parliament.

“A Member of Parliament has raised issues and he was entitled to raise them no matter where he did it. Not just because he is a member of parliament but he is also a citizen of Ghana. I realized that there is a certain consensus on the issue. He has done the right thing by proceeding to parliament to get the issue interrogated by filing an urgent question”.

Mr. Kwaku Baako added that he would rather want to wait for the defense minister to appear before parliament to answer the question before passing comments on the issue.

“I would rather wait for how parliament deals with this matter. I would rather wait for the defense minister to appear and give us reasons. Unfortunately, the Member of Parliament himself has made some comments which are prejudicial in my opinion. They lack inquiries but that is the beauty of democracy. People can comment but I prefer the defense minister appearing before parliament to answer questions and then we will continue from there”. Mr. Kwaku Baako Junior indicated.

Ghanaian's Reacts After A Man Lost His Mind At Kotoka Airport.