By Famous_News (self media writer) | 12 days ago 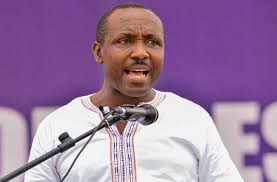 Political activist, kwame Asare Obeing A-Plus had questioned Ghanaians that "so if an independent candidate wins one seat, NDC will be left with just 4 seats in parliament?", after NPP general secretary, John Boadu told Ghanaians that they will win 270 parliamentary seats in 2024 general election.

Ghanaians in a way are angry about John Boadu's statement but used unpleasant words to ridicules him. Some people stated that he is drunk and talking in his dream and news reporters covered what he said in the dream because what he said cannot come to pass based on how NDC had strong holds in the country.

"Please excuse him. Maybe, he was talking in his dream and the reporters covered it 🤔 🤔.

IT'S THAT COMPLACENCY HAS SWALLOWED THEM.

Some people said that instead of John Boadu to focus on their core mandate and give Ghanaians good governance, he is only thinking of 2024 elections which is unfair to them.

Some people also reacted that John Boadu is yearning to be maintain at post and that's why he is taking "without thinking and that's what his followers want to hear".

"CPP, NDP or PNC might even win the rest meaning no NDC parliamentarian will be in parliament but this isn't his fault because he campaigned vigorously for the rebranding of the local gin that is tapped from the palm nut tree and finally it came to reality" another Ghanaian mocked the NPP general secretary.

See people's reactions below when A-Plus told them to discuss the issue on his social media wall.