By Tbprinz (self media writer) | 3 months ago 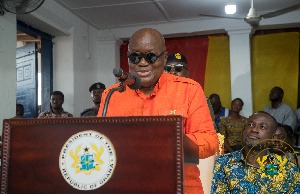 President Nana Addo Dankwa Akufo-Addo purportedly met with the top progressive system of the administering New Enthusiastic Party (NPP) over the requests by a portion of the party's Individuals from Parliament for the excusal of the Money Serve, Ken Ofori-Atta.

As indicated by a report by Asempa FM, the president met with the Executive of the NPP, Stephen Ayensu Ntim; the Overall Secretary of the party, Justin Frimpong Koduah, the Public Coordinator, Henry Nana Boakye and other public chiefs of the party.

The report showed that the authorities met the president on the fourth floor of the Banner Staff House in the late evening on Tuesday, October 25.

Authorities of the public authority, conscious of the subtleties of the gathering, who addressed Asempa FM on the state of namelessness, told their official journalist, Elton John Brobbey, that the president couldn't pursue a choice since there was no request before him.

Elton Brobbey said that the authorities demonstrated that insight about the interest of the NPP MPs came as a shock to the administration.

He added that the authorities had let him know that the president was simply going to settle on a choice on the matter on the off chance that the appeal endorsed by the NPPs who are requiring the sack of Ofori-Atta is introduced to him.

"One issue that run out through all the discussions I had with the authorities was that there was no request before the president conveying the choice of the 80 MPs for the president to sack Ofori-Atta," he said in Twi

He emphasized that despite the fact that there has been meeting and question and answer sessions, no authority appeal has been shipped off to President Akufo-Addo.