Afenyo-Markin’s Deceptive Statements Reveal That He Is Still A Parliamentary Deficient In Maturity.

By Pytas-Post (self media writer) | 12 days ago

How can Alexander Afenyo-Markin, the Member of Parliament for Efutu in the Central Region, blame the nation's economic woes on a large investment the NPP government made to fix the NDC administration's mess? What mess did the NDC make, and as a result of the funds spent to clean it, Ghana is going through its most challenging political period and the worst economic situation ever?

Since education and degrees cannot convey or show intelligence, many educated people are utter morons who are unable to demonstrate throughout their entire lives that they are deserving of serving a country or its people. Afenyo-Markin, you are one of them; I'm sure of it, let me clarify. 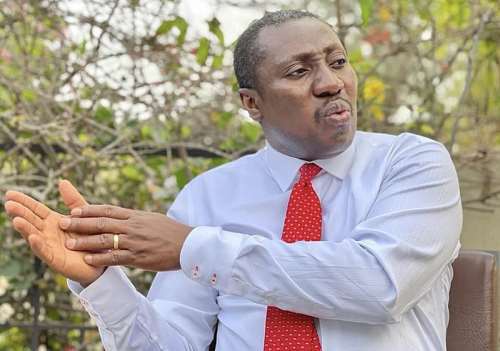 Mahama being blamed by Afenyo-Markin for the NPP's incompetence is akin to a child blaming his mother for getting burned after inserting his fingers in the fire.

In all honesty, you are not the only NPP politician that lacks the wisdom and experience needed to boost a country's productivity. Many NPP MPs are like you, which is why the NPP government's entire foundation has crumbled. If you didn't hear me clearly, please listen again: the NPP party's worthlessness has caused the entire foundation of the government to collapse.

As has been said numerous times, the NPP government bears no responsibility and has no concept of an apology. Unfortunately, the fact that they are quick to lay blame on others who never contribute to the failure of the government to cover up their incompetence, which is exactly the game Afenyo-Markin likes, this is also what has caused the majority of Ghanaians to despise Akufo Addo and the whole NPP government.

It's not the first time I've heard some of the foolish statements you've ever made while holding the title of "Member of Parliament." The NPP government has failed miserably, not just due to its own incompetence and ongoing corruption, but also because of unqualified politicians like you who try to win favor with bold claims that place the burden on the party's shortcomings elsewhere.

No matter how terrible the Mahama era and how corrupt he was, if Ghanaians could turn back time, they would rather prefer Mahama's era they rejected, when the dishonest NPP government convinced Ghanaians that Mahama was wicked and to blame for their misery. Because you are all thieves, the bible you used to swear an oath before taking office has revealed you all.

Financial institutions didn't experience major problems during Mahama's government, which was hailed as being awful for Ghanaians and with the NPP's commitment to making it better. However, since Akufo Addo became president, there has been widespread corruption inside the NPP. As part of steps made by the Bank of Ghana to purge the banking sector in 2019, a total of 16 banks that were fully operational in the nation folded within two years and had their licenses revoked.

The NPP government spent over GHC 18 billion, according to MP Mohammed-Mubarak Muntaka, to bring down the regional banks. Any sane person would realize right away that the Bank of Ghana's and the NPP government's policies would, over time, have a significant negative impact on the country's economy and currency. You would be equivalent to a young boy blaming his mother after sticking his fingers in the fire if you kept blaming Mahama for your failure.

As all the corrupt NPP politicians do, you Afenyo-Markin refer to the collapse of the banking systems by the incompetent NPP government as a "financial sector cleanup exercise." Afenyo-Markin is shown to be inexperienced and ignorant by his reference to Ken Ofori-Atta's that the Finance Minister said in a news conference on March 24, 2022, that the clean-up operation cost the government GHS25 billion in 2018.

I won't choose my words carefully because they know I know and I know they know that both Ken Ofori-Atta and Nana Akufo Addo are political criminals and accountable for this needless economic and political catastrophe. If Afenyo-Markin truly wants to know the truth; the answer is clear—Ofori-Atta cannot be replaced as finance minister. I've written extensively about this subject and explained the real reason why he can't.

To be able to point out the damage both the president and the finance minister have done to Ghana, one must be an honest person. Large sums of money, notably the missing COVID monies, were diverted into private banks, leading to the country's massive debt without accountability, the collapse of the economy, and the tremendous suffering experienced by the majority of Ghanaians.

I haven't spent as much time in prayer as I do now, hoping that Ghana will have a new government after this destructive one, one that will be able to put all these criminals, whose corruptible actions are to blame for the current economic disaster behind bars for the rest of their lives. Even though Akufo Addo is packing the Supreme Court with judges, he can't stop something like that from happening.

Recently, started talking about pardon after realizing that something similar might or will happen. The ordinary Ghanaians don't need a president who is not willing to fight corruption seriously in the country because they are sick and weary of the political lies and deceptions about preserving the public purse. Therefore if the next president after Akufo Addo is not prepared to look into and prosecute the corrupt, Ghanaians won't need him or her.

"Better Managers Of The Economy" : Felix Kwakye Tackles Bawumia On That Statement They Made