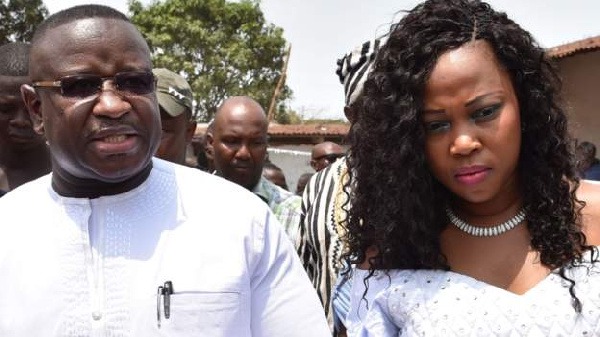 Fatima Bio, the first lady of Sierra Leone, made the contentious claim that her husband has a PhD in coup planning. She made the remark to support the idea that Julius Maada Bio, who will be running for reelection in the 2018 general elections, cannot be deposed.

She reportedly said the thing last weekend at a charity event in the US. "Can you remove Maada Bio, who has a PhD in coup d'état? "How can you get rid of someone who instructs people on how to organise coups? The man has a PhD in [creating] coups. "The First Lady made her point clear in a video posted to Facebook. Last month, violent rallies in opposition strongholds resulted in the deaths of 31, including six police.

Despite allegations that the incidents were caused by the high expense of living, Maada Bio blamed opponents in a speech to the country. The security chiefs were then replaced by him. In the country's history, the president is known to have participated in two coup d'états.

First, he seized power in April 1992 as a member of a group of youthful military officers who toppled Joseph Saidu Momoh's APC-led civilian administration. Four years later, in January 1996, he carried out a palace takeover and replaced Captain Valentine Strasser as ruler. He held elections and transitioned to civilian administration two months later.

Maada Bio came to power in 2018 on the ticket of the Sierra Leone People’s Party (SLPP). He beat the then candidate of the ruling APC, which had Ernest Bai Koroma as outgoing president.