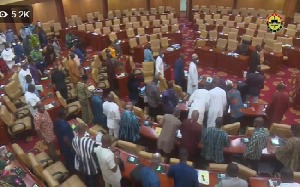 Despite the fact that the Majority was not present for the exercise, the Speaker stated that their absence would not prohibit the House from conducting its business for the day.

The Minority has promised to fight the budget since Ken Ofori-Atta presented it, claiming that its acceptance will cause hardship to Ghanaians.

The administration has suggested scrapping the collection of road tolls, among other policies in the budget. In addition, an e-levy was proposed in the budget.

Murtala Mohammed, the Tamale Central MP, claimed that passing the budget is the same as sending Ghanaians to their deaths. He claimed that the budget for 2022 is riddled with "inconsistencies and half-truths."

Mr Murtala Mohammed stated, "The only persons whose funeral was not announced were the folks who live in the Flagstaff House."

According to Isaac Adongo, MP for Bolgatanga Central, the proposed fee is unproductive, regressive, and will cause most enterprises to fail. "Whatever you want to call it, it's a monster." It's a savage tax. "The tax will alter the entire business community's phase," he said.

As a result, he urged his fellow Ministers and MPs to join him in voting against the levy's passage.

Rockson-Nelson Dafeamekpor, Member of Parliament for South Dayi, said the introduction of the electronic transaction levy (e-levy) is not the ideal way for the government to raise money since it is retrogressive and unclear.

Meanwhile, NPP MP for Adansi-Asokwa, K.T. Hammond, remarked in an interview with JoyNews, "Read my lips, Parliament has not constitutionally rejected our budget."