Julius Debrah (born 24 April 1966) is a Ghanaian politician and former chief of staff to the former President of Ghana John Dramani Mahama. He is a member of the National Democratic Congress. In February 2015, he was appointed chief of staff after the former, Prosper Douglas Bani was removed from office and assigned to Ambassador Extraordinaire and Plenipotentiary. Debrah previously held the positions of Minister of Local Government and Rural Development and Regional Minister for Eastern Region. 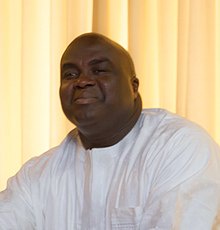 Debrah studied at Mpraeso Secondary School then moved to Achimota Secondary School for A-Levels from 1987 to 1989. Following this, he gained admission to the University of Ghana where he obtained a Bachelor of Arts in Archaeology and Sociology.

In 2012 when his party was in power he once again stood for the parliamentary candidate for the Suhum seat and lost by 388 votes the closest he had come in the three times he had stood for the parliamentary seat. He lost to the incumbent his rival from the 2004 Elections Frederick Opare-Ansah, who got 24,046 votes representing 49.28% whilst he got 23,658 representing 48.49%.

He served in that role for a year and was seen as someone championing the involvement of the local government in nation-building.

"Governance is about satisfying the needs of the people. This makes local government highly influential since it is practised at the grass-roots level”.

– Debrah on the importance of Local government in nation-building during his maiden visit to the Kpone Katamanso District Assembly on 24 April 2013.

Debrah was appointed to serve as Minister in charge of Local Government and Rural Development after serving as regional minister for both Greater Accra Region and Eastern Region. This was seen by experts as a move to ensure the massive involvement of the local authorities and people in decision making and nation-building.

In 2015, February, Julius Debrah was appointed chief of staff by President John Dramani Mahama to replace Prosper Bani after serving as the Minister of Local Government and Rural Development the one year prior. Debrah's appointment was received with joy by members of the National Democratic Congress.

A native of Obomeng Kwahu, Debrah is married with two children.