Afenyo-Markin Said The Vote Of Censure Against The Health Minister Is Just Another Personal Attack.

By Raynews (self media writer) | 4 months ago 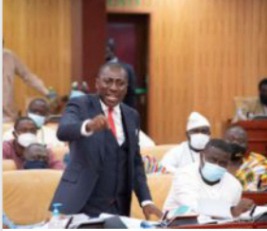 Calls for the expulsion of Health Minister Kwaku Agyemang-Manu by the Minority in Parliament, according to Deputy Majority Leader Alexander Afenyo-Markin, reflect a vengeance against the Minister.

Mr Afenyo-Markin stated that the abrupt vote of censure is part of a campaign to smear the Health Minister's reputation.

"Perhaps this unexpected attempt at perjury is part of their normal partisan political score scoring." If they're trying to personalize the situation by implying that someone dislikes Agyeman Manu and wants to pursue him, they should say so."

"I expect them to act in good faith, but this latest onslaught on the Minister is nothing more than a personal attack." It would be unreasonable for the Minority to suddenly assert that the Minister should be censured. On Citi TV's Eyewitness News, he remarked, "That I believe is an attempt to be too partisan to attack the Minister's integrity."

The Minority filed a resolution on Wednesday, backed by all 137 NDC MPs, to remove the Health Minister from office.

Muntaka Mubarak, the Minority Chief Whip, explained in a Memo to the Speaker that the Dormaa Central MP's behaviour violates Article 191 of the 1992 Constitution.

The Minority believes the Health Minister lied to the Ad Hoc Committee when he "misrepresented under oath to the Ad Hoc Committee that no payment was made under the agreement to the Private Office of His Highness Sheikh Ahmed Dalmook Al Maktoum [the Dubai-based businessman the Ministry of Health contacted for the procurement]."

The Majority, on the other hand, has accused the Minority of behaving in bad faith by calling for Kwaku Agyeman Manu's removal.

Alexander Afenyo-Markin, speaking to the press in Parliament on Wednesday, said his party is astonished by the Minority's action because the Committee decided that both parties unanimously agreed on the deal.

"So we thought we'd handled with the Sputnik-V issue, but we've heard that there are attempts to file a motion of censure against the Health Minister." We'll be astonished if that happens on the House Floor because it'll be considered major bad faith.

"Regardless, we wait to see," he said, "but we have adopted the report in plenary by consensus, just as the Committee did with its conclusions and recommendations."

Meanwhile, Health Minister Kwaku Agyeman Manu says he is unconcerned by the Minority's demand that he be removed from office for his role in the bungled Sputnik V vaccination contract.

The Dormaa Central MP told Joy News' Kwesi Parker-Wilson that he was unaware of the Minority's vote of censure against him.

"Are you bothered by what?" What crime have I committed? That is why I stated that I do not want to speak with any journalist at this time because I will become very emotional... I want to conclude there because there was a committee, and the Committee's report was adopted by the Chamber," he remarked.