Parliament is set to finally vote on the budget today, November 26, 2021. However, information trickling in has it that the Majority Caucus in Parliament delayed and failed to appear in the house by 12:00 pm as slated for sitting. Undoubtedly, this unfortunate and unexpected actions have caused massive stir and uproar on social media.

Many members of the Minority Caucus have come out to publicly register their resentment over the attitude of the Majority. Prominent and outspoken members of Parliament including Honourable Sam Nartey George, Okudzeto Ablakwa, Haruna Iddrisu have all chastised the majority Caucus and described their attitude as a disrespect to the house. 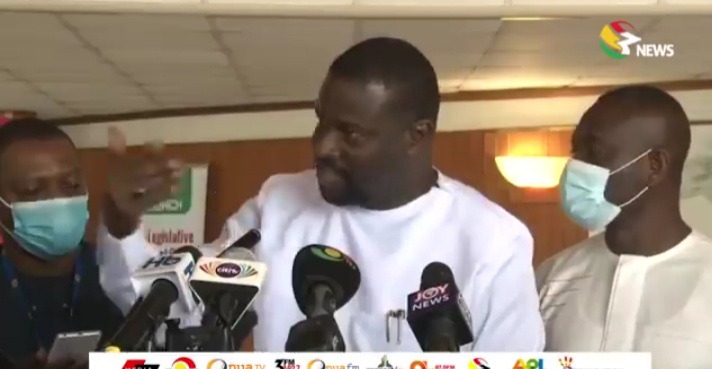 Recall, few days ago, the majority side were criticized for similar reasons of appearing late for the debate on the budget. Indeed, such attitude should not be entertained regardless, according to some Ghanaians who were appalled by the reasons given by the majority.

Amidst the trending rumours and brouhaha, the Majority Chief Whip of Parliament, Frank Annor Dompreh has boldly held a presser to react to the allegations made by the Minority Caucus. He has refuted the various allegations that suggested that the NPP MPs have run away from their own budget.

According to the lawmaker, the minority Caucus is engaging in propaganda to score political points. He stated categorically that, his team has not attempted to avoid the voting for fear that the budget would be rejected. He explained that, they were in an all important meeting with the Caucus until the Speaker called for engagement with the leadership.

Speaking further in an interview with TV3, Annor Dompreh indicated that the majority is confident that the budget would be passed after the voting today. The smiles on his face and the tenor of his remarks is a clear indication of his confidence in the approval of the budget.

He said, "We have been for a very long time in a meeting. As I speak, we are still in the meeting. So, for anybody to have the temerity to address you and to say that we are bringing in our members with a chartered flights and all manner of things, treat it as false."

Latest development indicates that the Speaker of Parliament has suspended sitting for 30 minutes due to the absence of majority members in the house for the approval of the budget.