Ken Ofori Atta Went To Church With His Beautiful Wife To Thank God For Helping Him So Far. PICS

By MrsBabie (self meida writer) | 15 days

The Minority had serious issues and concerns about Ken Ofori Atta, ranging from their non-satisfaction with his performance, the Finance Ministry’s expensive contract McKinsey, reconciliation of oil revenue and some alleged unauthorized fund release. 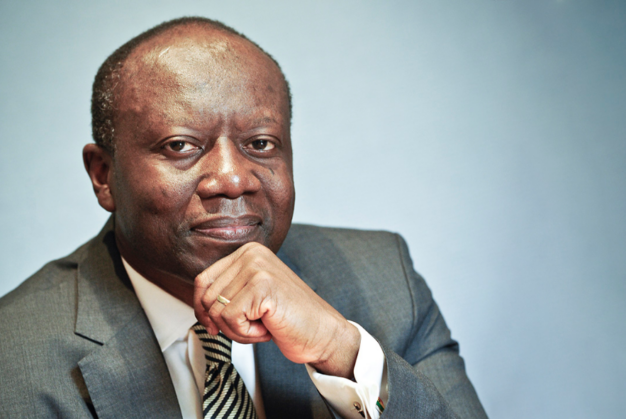 Concerning the unauthorized fund release, Hon. Haruna Iddrisu had informed the House that the minister came to Parliament to request for just GH¢10 billion for the propose of financing the government but by his own answers, as captured in the Appointments Committee’s report, Ken Ofori Atta had rather authorized the release of GH¢22 billion from the BoG. He, therefore, questioned where Mr Ofori-Atta had the authorization for the BoG to release the amount to the government. He said the appointee would bear the brunt of his inability to reconcile fiscal data, not providing enough details of how much the Bank of Ghana financed the government of Ghana in the 2020 period. “We will demand more information on this matter because we are convinced that it is in breach of the law, Bank of Ghana Act, Fiscal Responsibility Act and Pubic Financial Management Act,” he said.

The Tamale South MP said the Finance Minister was also on record to have engaged a company known as McKinsey and Company Limited and paid them $1.5 million per quarter, the payment, to McKinsey, he described as a rip-off, “We have competent hands to do the work in Ghana; we do not need any McKinsey and Company Limited in Ghana for any purpose. It is a rip off of the state given the huge sums of money that are paid to the group,” he had said and even assured that the Minority would call for further investigations into the operations and activities of McKinsey in relation to the Ministry of Finance and the Ghana Revenue Authority (GRA).

Lastly, the minority had issues on reconciliation of oil revenue, as Hon. Iddrisu drew the House’s attention to a letter dated March 29, 2021 from the Public Interest and Accountability Committee (PIAC) which stated that the Ministry of Finance had engaged the Chairman of PIAC, Professor Kwame Adom Frimpong, for a meeting on Wednesday, April 7, 2021 to reconcile outstanding issues, including an amount of GH¢2.4 billion of oil revenue. “We need to resolve the puzzle and find adequate and satisfactory answer as to the whereabouts of this money in order that we just optimal and prudent use of our oil resources as a country,” he said.

Interestingly, despite all these serious issues, when it was time for his approval, Parliament, as a whole, endorsed the report and approved the nomination, following an initial unanimous recommendation by the Appointments Committee of Parliament, as members had by consensus, approved Mr Ofori-Atta for appointment as the Minister of Finance and had recommended to the House to approve Mr Ofori-Atta's appointment.

With this unanimous decisions going in his favour, and his well known Christian background, Ken Ofori-Atta had planned a series of Thanksgiving activities to obviously thank God, and his praying partners, who had obviously helped him overcome a massive national call to get him not approved. 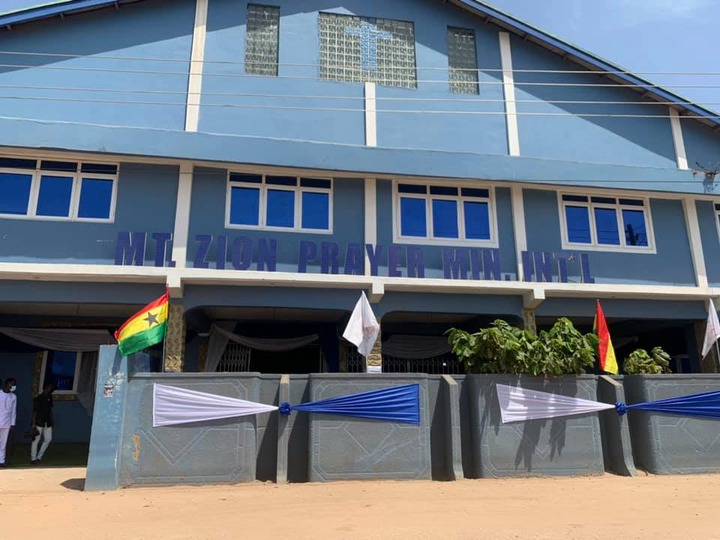 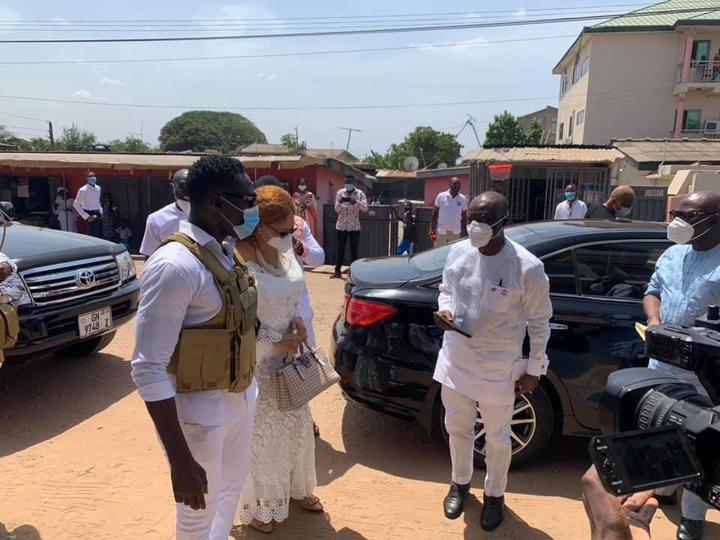 So from pictures found online and released today, he and a team prominent dignitaries were at Mount Zion Prayer Ministry International for the Thanksgiving Service at Lapaz in the Okaikwei Central Constituency and aside the excitement that met their arrival, what may have been going viral is the fact that, a well built bodyguard had his bullet proof vest on, raising questions, as to why the need for such massive protection and dissemination of such picture, when he was visiting a house of God, which is well known for "prayer" but who knows, just maybe, we all need same bullet protected suits, even in the church, as you may never know, who may want you dead in the church even. 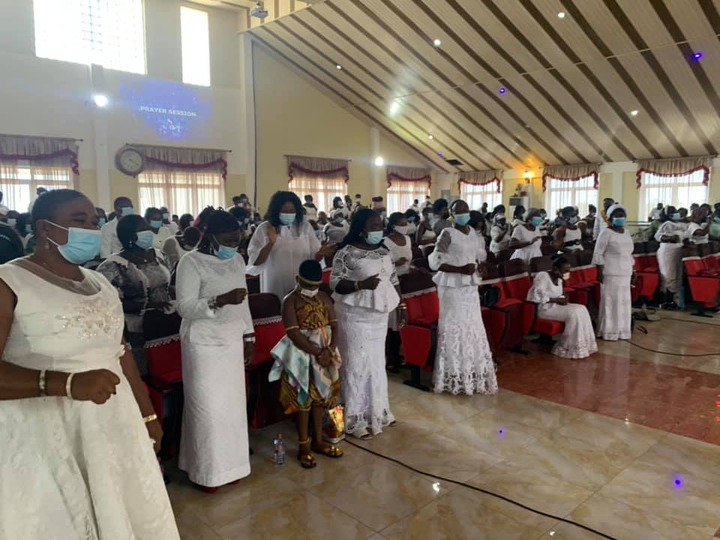 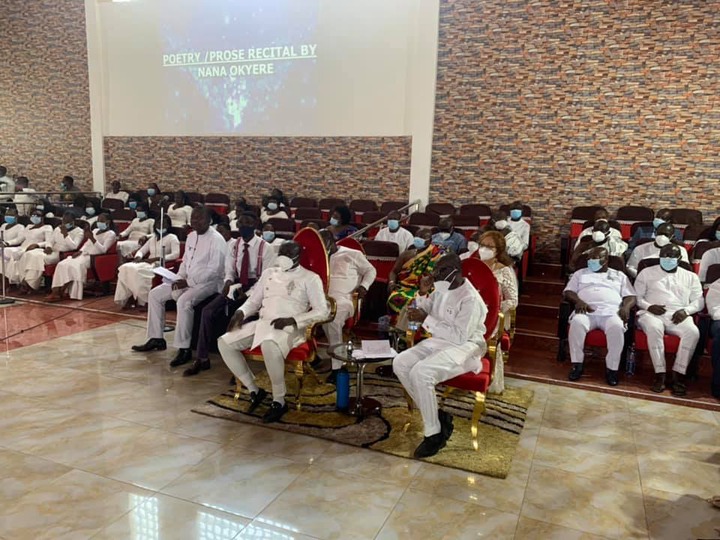 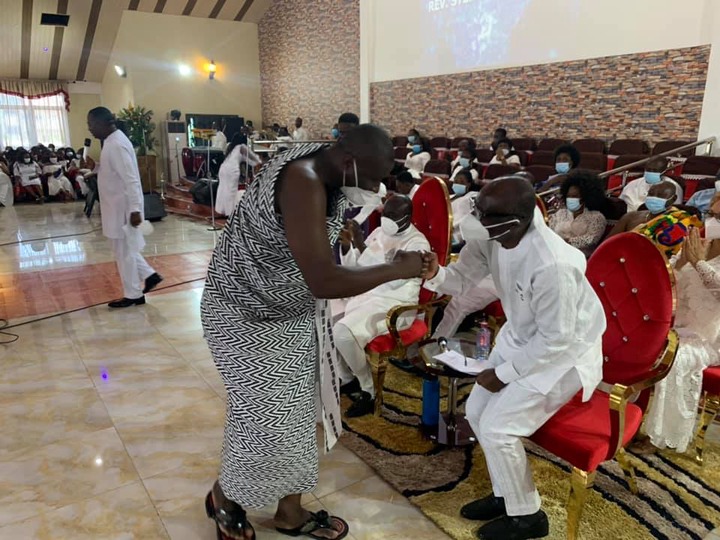 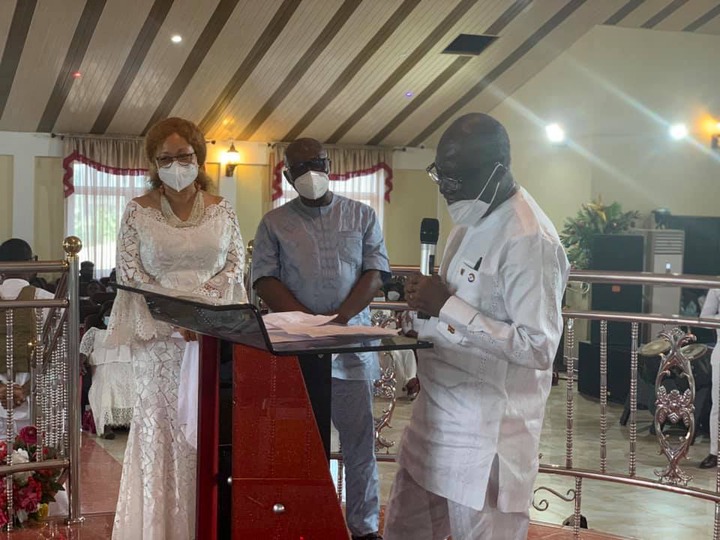 In his speech, he expressed profound gratitude and thanksgiving to God, for his protection and promotion. He acknowledged that, what many see as successes in his life, has always been by the hands of God and his unending holing unto Him, as his everything. He also expressed thanks to the senior pastor of the church, whom he described as a friend and prayer warrior, who has stood by him all the time, in his career, marriage and even public life. He promised to continue to be a support to the church and asked the pastor, not to also stop holding up in prayers, as he seeks to bring a transformation to Ghana's economic status daily. 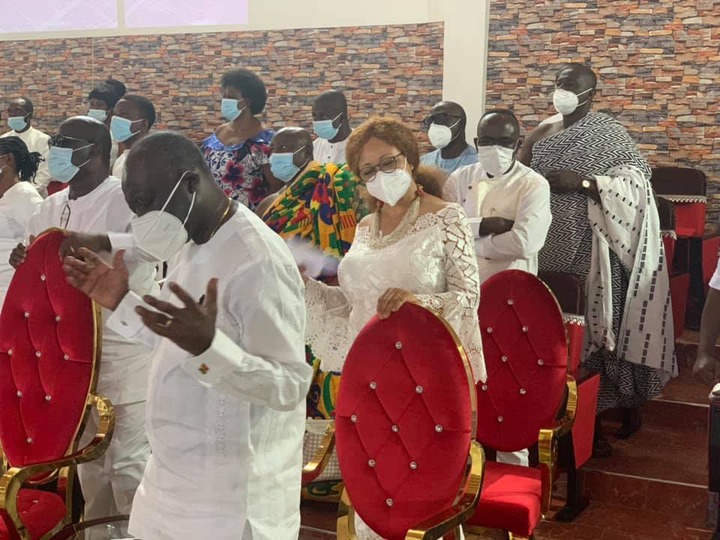 From the pictures, the church was excited to see him visit their church, as Ken Ofori-Atta was seen enjoying the service as well, as he was seen actively participating in every segment of the service with enthusiasm. This may not be the first time, he has been seen associated with the church and ministers of the gospel, when he celebrated his birthday the last time, he was seen in the company of Archbishop Duncan Williams, who was the guest of honour at his anniversary celebration. Again, when he reads the budget statement, he largely inculcates scriptures into it, reaffirming his belief in God and his power to help him manage the economy of the country. 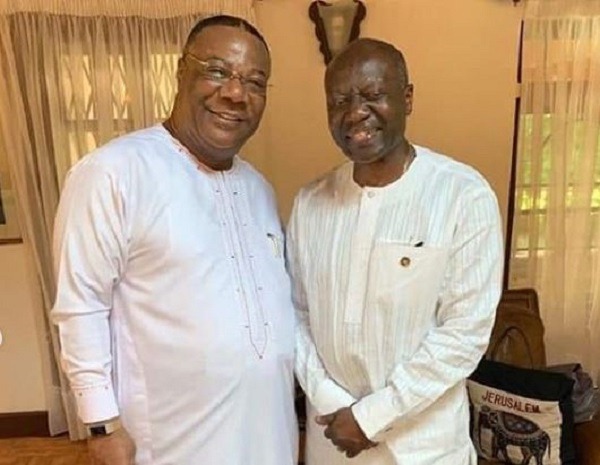 Those Documents Are Not From "The Fix Your Country" Camp, I Have Lost Respect For You-Efia Odo Slams

GES to Release Promotion Exams Results this Month, Teachers to be Put on Scale June,2021.