Media personality, Johnnie Hughes, made a bold revelation on the New Day show, TV3. This came about while he was reacting to the arrest of Captain Smart. He made it clear that never in the history of this country had intimidation ever won. He blamed President Nana Addo for all this intimidation that journalists have to suffer just because they act as citizens and not spectators. According to Johnnie Hughes, the President and his staffers do not believe in the inaugural speech which Nana Addo read in 2017 since it was plagiarized and was not written thoroughly. 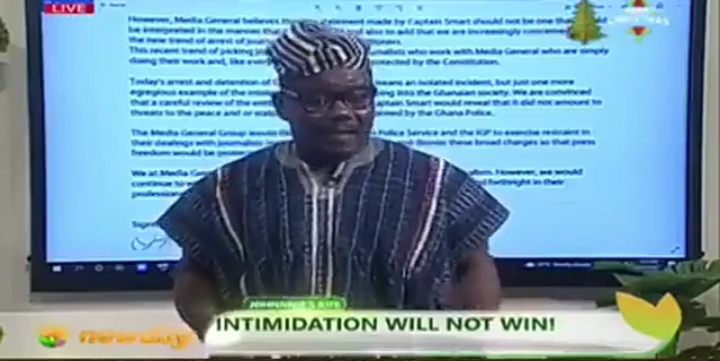 He revealed that he, Johnnie Hughes, was once intimidated by some people from the ruling party. He narrated how he blasted some government officials whose names were sighted in the Auditor General's report for public fund misappropriation. He stated emphatically that he blasted these people using facts laid down by the auditor general.

According to him, these people came to him to threaten him that they will sue him "The auditor general report published that some individuals who should have known better, had spent money they should not have spent. I quoted the auditor general. Some right-thinking individuals sent me a message that I was going to be sued.

"As for the threats, I have had plenty. However, I am so professional that I will not fall for that cheap thing. If you sue me, I will cite the auditor general. Why are you not suing or challenging the Auditor General.", he added.