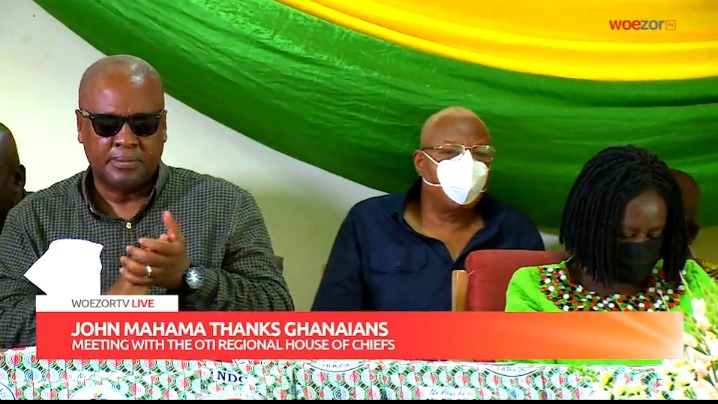 The former President of the Republic and leader of the opposition National Democratic Congress, John Dramani Mahama has gained the massive support in the Oti Region which could arguably be the best since he started his nationwide Thank-You campaign. President Mahama and his entourage were received with smiles as millions lined up on the streets of the regional capital to catch a glimpse of his personality.

Mr. Mahama addresing the traditional authorities gathered expressed he and NDC's gratitude to the leaders, stakeholders, religious leaders and the general public over their support in the last elections. Mr. Mahama indicated that gratitude is a value that cannot be omitted from human relations, and his team's presence is an explanation and practicality of the value. 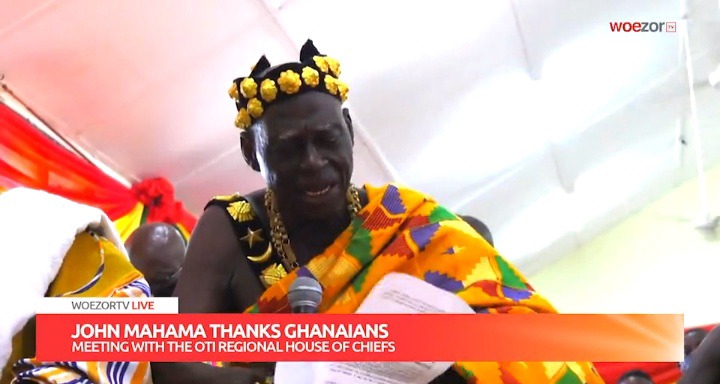 The Chief of Challa traditional area, Nana Kennewu Chederi II also thanked Mr. Mahama and his entourage for their visit. He expressed joy in how "humble" Mahama has been since he was in power and even out of power. He showered praises on the former President over his 'humility, tolerance, honesty and integrity.' According to Nana Chederi, Mahama's values is an embodiment of a great leader and worth emulating.

Speaking further, he thanked Mr. Mahama on the manner in which his party, NDC handled the 2020 election and its related matters. According to him, John Dramani Mahama's God fearing traits and love for the country saved Ghana from been plunged into chaos and pandemonium. The Chief also shared the same belief that the 2020 elections was fraught with plethora of avoidable discrepancies, blaming the EC and the sitting government for manipulations.

He said, "If you were not God-fearing, and intended to stay in power through unlawful means, it would turn the nation into chaos which would have been too nasty to contemplate when the people's verdict was stolen in the 2020 elections."