Guinean Coup: Guineans have these messages for President Nana Addo of Ghana.

By CornerNewsUpdate (self meida writer) | 7 days

Many Guineans and Africans as a whole, has reacted and condemned the recent statement release by the Ghanaian’s President, President Nana Akufo Addo, following the recent Military take-over in Guinea. 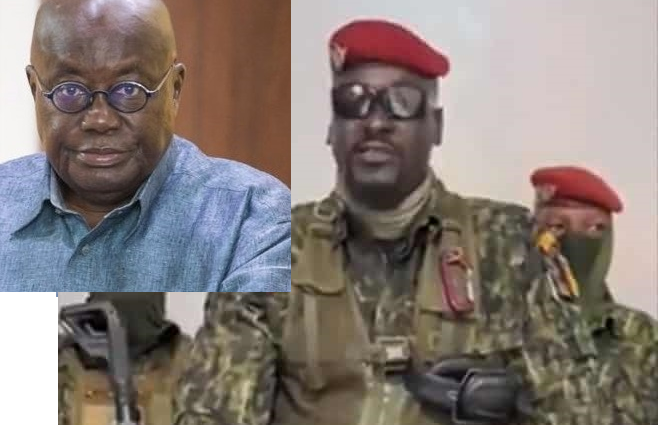 On Sunday, September 5, 2021, the Guinean’s Special Forces led by Mamady Doumbouya, staged a coup, capturing President Alpha Condé and announcing a nationwide curfew "until further notice" , as well as replacing the governors by the military.

As the Chairman of the Economic Community of West African States-ECOWAS, President Nana Addo of Ghana released a Facebook comment, asking the Military in Guinea to immediately release President Alpha Condé, and all other Government officials arrested; and to return the country to a constitutional rule.

In a Facebook post dated September 5, President Nana Addo said: “ECOWAS notes with great concern the recent political developments which have occurred in Conakry, capital of the Republic of Guinea. ECOWAS condemns unreservedly the attempted coup of Sunday, September 5, 2021. ECOWAS demands respect for the physical safety of the President of the Republic, Professor Alpha Condé, and his immediate and unconditional release, as well as that of all arrested persons”.

The statement added that; “ECOWAS also demands a return to constitutional order on pain of sanctions. ECOWAS reaffirms its objection to any unconstitutional political change. We ask the Guinean defense and security forces to remain in a constitutional posture, and express our solidarity with the Guinean people and their Government”.

President Nana Addo’s comments sparked mixed feelings among some Guineans, Ghanaians and attracting many comments on the social media.

Below are some of the comments in reply to president Nana Addo’s post. 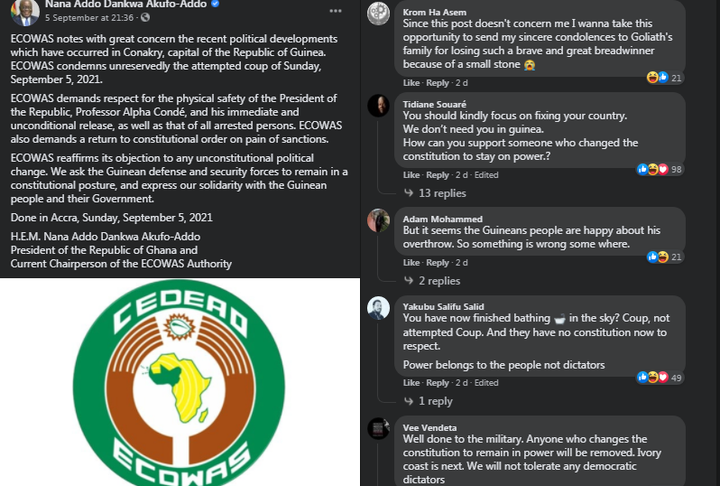 Ramou Fofana said: “Why didn't ECOWAS condemn Alpha Conde's actions for a third term in power, knowing fully well he change the constitution to suite his greed. ECOWAS should sanction an African head of state who over stayed it's country's mandate”.

Aboubacry Mbaye wrote: “Mr. President we do respect you, and your colleagues but wouldn't it be wiser to protect the people from injustice and dictatorship? Africa deserves more from its leaders. I wish there wouldn't be any coup in Africa”.

Kwaku Kyei Yeboah also replied that, “Where was ECOWAS when he amended the constitution to extend his stay in power? Allow him to suffer the consequences of abusing power from the people”.

MaaYatta Jennifer Kosia Kamara replied that, “What did ECOWAS do when he (President Alpha Condé) single handedly amended the country's constitution”?

Thierno Madiou Bah angrily hit back saying, “Where were you when he changed the constitution and lock up politicians in prison, please leave Guinea alone and let us move on with Col Dumbuy”.

Edward Success Beyai posted, “It's saddened whenever an African Head of state is been captured by our own military force but I have I big question. When will the African Heads of state respect our constitutional laws which governs everyone!!!!! You break the law the military break your government”!!!

Charles Togba: “Mr. Chairman you need to cry your own cry now and forget about Guinea...Alpha Criminal Condé violated the country constitution so he needs to pay the price of ridging election”.

Alfred Geze: “ECOWAS is only there to protect corrupt heads of state and dictators. Where was ECOWAS when he illegally changed the country's constitution? Constitutional rule isn't a tool to hide behind "the law" and perpetuate evil for the selfish gains of some few greedy men”. 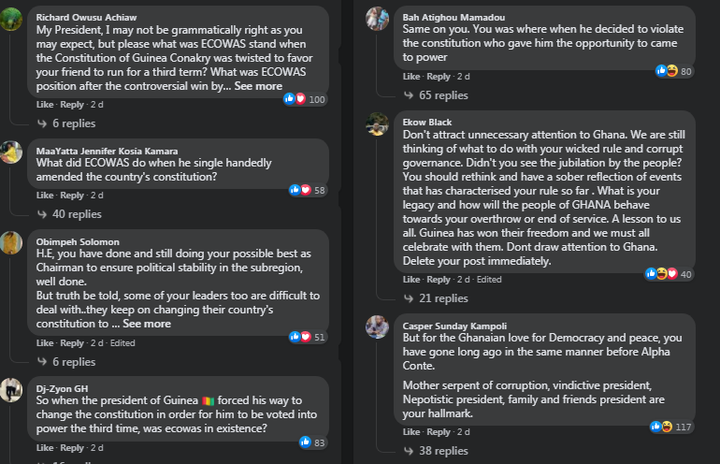 Ekow Black from Ghana also said, “Don't attract unnecessary attention to Ghana. We are still thinking of what to do with your wicked rule and corrupt governance. Didn't you see the jubilation by the people? You should rethink and have a sober reflection of events that has characterized your rule so far. What is your legacy and how will the people of GHANA behave towards your overthrow or end of service. A lesson to us all. Guinea has won their freedom and we must all celebrate with them. Dont draw attention to Ghana. Delete your post immediately”.

Casper Sunday Kampoli said, “But for the Ghanaian love for Democracy and peace, you have gone long ago in the same manner before Alpha Conte. Mother serpent of corruption, vindictive president, Nepotistic president, family and friends president are your hallmark”.

Benedict S. Tamba wrote; “Nonsense, you all are shameless, did Ecowas ever spoke when the constitution of Guinea was tempered with, foolish old men, all of you are part of the reasons WE African youths are trying so hard to leave this continent”.

Reading through all these replies to President Nana Addo’s comments, it is very clear that many people in Guinea, and all over the world are supports the Military overthrow in Guinea. 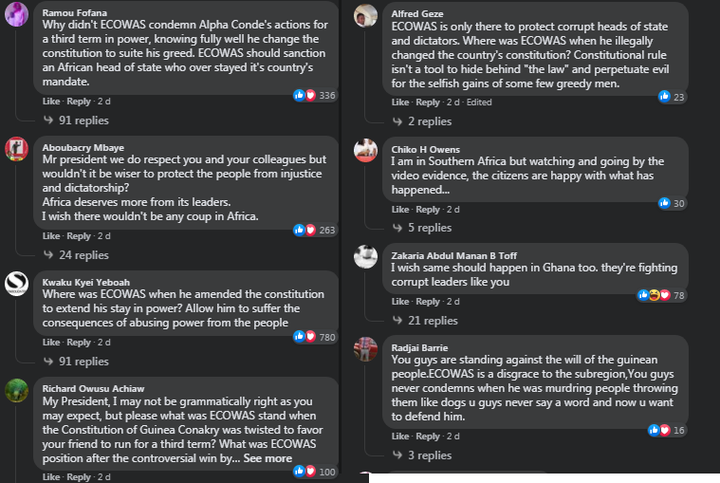 Also after the coup d'état, hundreds and thousands of Guineans youth celebrated on the streets of the Guinean’s Capital Conakry, and other parts of the Country.

What are your views on the coup d'état in Guinea; and the comments made by President Nana Addo as the Chairman of ECOWAS, demanding the immediate release of the President?

The number one cause of Divorce in Ghana is not Poverty or Sex. Find out what it is(Opinion)

WAEC flags some schools over suspected intention to cheat.