A new wave of demonstration beckons and this time the protestors are threatening to wage on government the fiercest demand to complete the abandoned Saglemi Housing project. An activist of pressure group #FixTheCountry, Okatakyie Afrifa Mensah says the younger generation will not allow such a national asset to be wasted because of bad leadership.

He scored that the string of political leadership that Ghana has had over the past decades after Dr. Kwame Nkrumah has been very disappointing. He noted until the youth takes decisive action to stop leadership from allowing such investment to rot, issues regarding employment, accommodation, health, and other critical needs shall be a challenge in the future.

Minutes after a series of rants on his current affairs show on TV XYZ, Okatakyie Afrifa Mensah took to his Facebook post mobilizing for support to wage 'war' against the government to ensure the completion of the abandoned Saglemi Housing project which was initiated by the Mills-Mahama administration. He explained that Ghanaians cannot afford to be homeless when such a facility, capable of accommodating tens of thousands of people who have no place to rest, is left to rot. 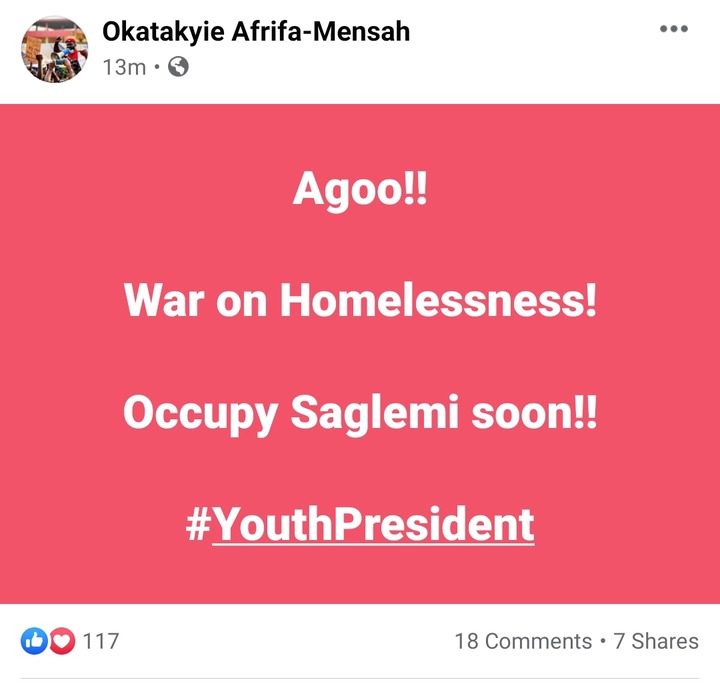 With the caption "Occupy Saglemi soon", Okatakyie Afrifa stressed that the demands of the #FixTheCountry campaigners are not limited to the streets but to places as the Saglemi Housing project, and any other abandoned national infrastructure "including Kwame Nkrumah's". He disclosed that several industrial sites such which were started years ago by Dr. Kwame Nkrumah have been defunct because of poor leadership.

He recalled that the recent protest in Western Region allowed them [#FixTheCountry] campaigners to learn of the sorry state of the Aboso Glass Factory and the Aboso Rubber Factory, and others. Okatakyie Afrifa intimated that these defunct companies could have made a difference if successive governments have been particular about resuscitating them.

In his view, the rate of unemployment wouldn't have been this severe if the government has been proactive and industrious. With this hint on Facebook, one could predict what the next action of the protestors would be in the coming future.