Broadcast journalist, Kevin Ekow Taylor has fallen into a pit of backlash from the caucus of sixteen Regional Youth Organisers of the opposition National Democratic Congress (NDC) for attacking the National Youth Organiser, Lawyer George Opare Addo. According to the group, Kevin Taylor has alleged that Mr. Opare Addo was a chief instigator of a mass rejection of vehicles that were offered by the flagbearer of the NDC, John Dramani Mahama, to the youth wing during the 2020 election.

Reacting to this allegation from Kevin Taylor, the youth wing of the NDC said the claims are frivolous and pigment of the accuser’s own imaginations. They remarked the entire story as published on social media by Kevin Taylor should be discard on grounds of untruth and propaganda.

“Without mincing words, this claim is an unblemished untruth cooked in a dilapidated kitchen of mischief and served on the cracked plate of falsehood,” they noted in a press statement.

The NDC Youth Wing rebutted that they are cannot be coerced or lure into any agenda that turns against the ideals of the NDC and the flagbearer as suggested by Kevin Taylor alleged. They noted that they are independent and can see through the deceit of Kevin Taylor to cause disaffection among them and the NDC.

They corrected that the decision to reject the vehicle was a collective decision taken by the 16 Regional Youth Organisers.

“It is an affront to our intelligence for any person to suggest that it was Pablo [George Opare Addo] who instigated us to reject the vehicles. All 16 Regional Youth Organisers are independent minded individuals with different orientation when it comes to taking decisions. No decision has been by the Caucus without subjecting it to checkmate decisions.”

To settle the dust around these vehicles that were to be gifted to the 16 Regional Youth Organisers, the Caucus stated that it was by the effort of the National Youth Organiser, George Opare Addo that they got wind about it. They say, two of the vehicles were shown them for demonstration purposes so they could believe it was theirs for the taking.

However, the youth wing estimated that the make of the car and the cost of operation could be a burden on them and decided to turn the offer down. They then suggested to have a letter issued to the National Chairman and the flagbearer to explain their decision and also hope for a change of the vehicles to fit their ‘budget’.

At the time, Mr. George Opare Addo had made available five (5) pickup vehicles for some Regional Youth Organisers and promised to get the remainder in due time so they could conduct their business for the political season. 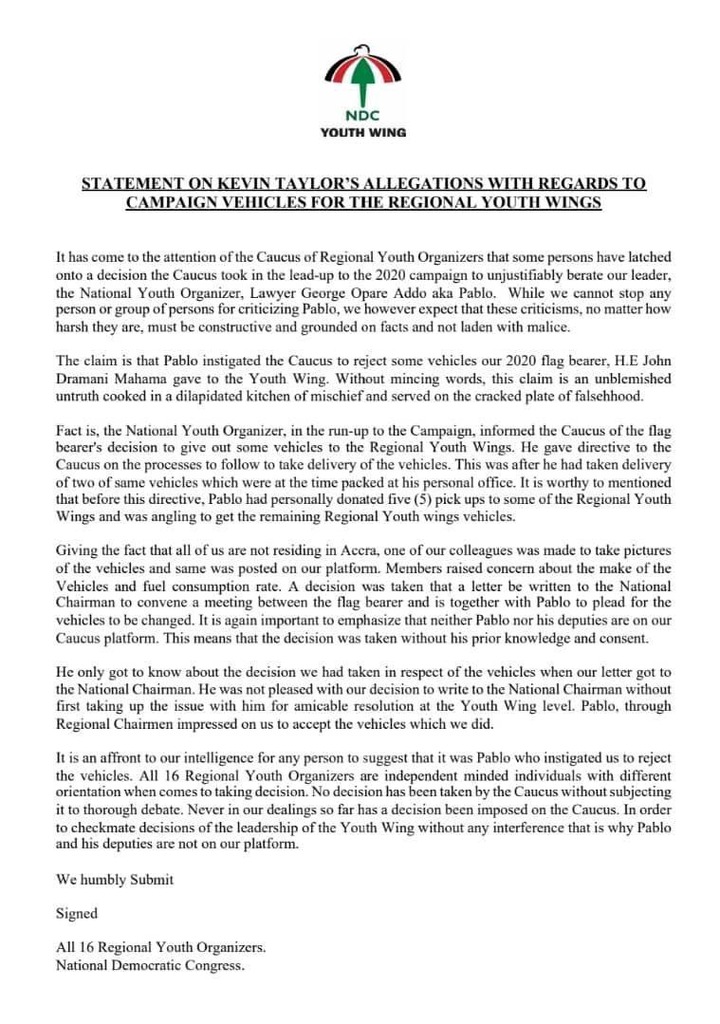