The First Ever Military Coup That Rocked The Nation

After Ghana gained independence from the British in 1957, the nation has experienced seven military coups led by some major personalities. Many factors led to this unconstitutional seizure of power and some of them included economic crises, insecurity and bad governance. 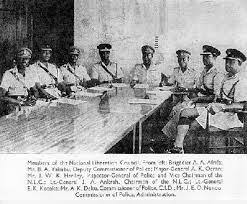 The first major coup that happened in Ghana occurred on February 24, 1966. This was executed by the National Liberation Council, (N.L.C). On the morning on 24th February 1966, the N.L.C led by Major General Kwasi Kotoka, seized power from the then ruling Convention People's Party at a time when President Nkrumah was out of the country. At six o'clock that morning, General Kotoka made an announcement on Radio Ghana. This was his statement;

" Fellow citizens of Ghana, I have come to inform you that the military, in cooperation with the Ghana Police, have taken over the government of Ghana today. The myth surrounding Nkrumah has been broken. Parliament is dissolved and Kwame Nkrumah is dismissed from office. All ministers are also dismissed. The Convention People's Party is disbanded with effect from now. It will be illegal for any person to belong to it".

Parliament was dismissed and all ministers were arrested. A heavy fight also broke out between military men and the presidential guards at the Flagstaff House. The National Liberation Council consisted of four soldiers and four police officers. The council was headed by General J.A Ankrah.

Under the N.L.C, food prices and the cost of living of Ghanaians increased. Profits from higher productivity went to those who owned businesses and foreign investors therefore the Ghanaian economy became class conscious.

However, in 1967, there was an attempted coup known as 'Operation Guitar Boy' by a group of junior soldiers. This unsuccessful coup attempt led to the death of Major General Kwasi Kotoka. 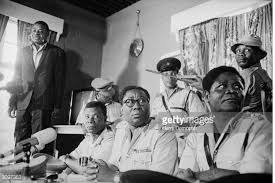 Content created and supplied by: EwuraAdjoa2662 (via Opera News )