By realglobal (self media writer) | 1 year ago

Surprisingly, the president of the republic of Ghana, His Excellency, Nana Addo Dankwa Akufo Addo does not remember the newly created fanteakwa south district that was created from the parent fanteakwa district exists.

This was revealed in his address to the party faithful's, supporters and the entire citizens of Ghana when addressing a gathering at Nkawkaw as part of his campaign visits to the eastern region.

The president of Ghana and flagbearer of the ruling New Patriotic Party, NPP in the upcoming December 7 election Nana Addo Dankwa Akufo -Addo reiterated the government's intention to build district hospitals in the the newly created districts in the eastern region.

In the course of mentioning the beneficiary districts in the eastern region,(i.e. the president's region), he omitted Fanteakwa South until later reminded by a personality from Begoro and he later reminded the finance minister to capture it.

"I am happy to inform Nananom, this is how the government's agenda 111 will see to build hospitals in districts without hospitals in the course of the next 12 months. Government will construct hospitals in the following districts in the eastern region. They are Atiwa, Akyemansa, Asuogyaman, Ayensuano, Birim South, Kwahu Afram Plains South, Upper West Akyem and Asene Manso Akroso district.......... i've just been told by the person from Begoro that there is fanteakwa South as well." - Nana Akufo - Addo.

The president of the republic is in the eastern region as part of his 3 days campaign tour. 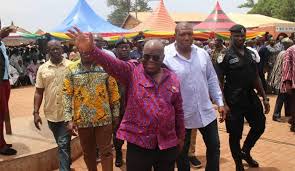