You Will Refund The $82,556 Plus interest On Allowances Paid Lordina- Abronye Threatens Mahama

By Blind_Justice (self meida writer) | 21 days 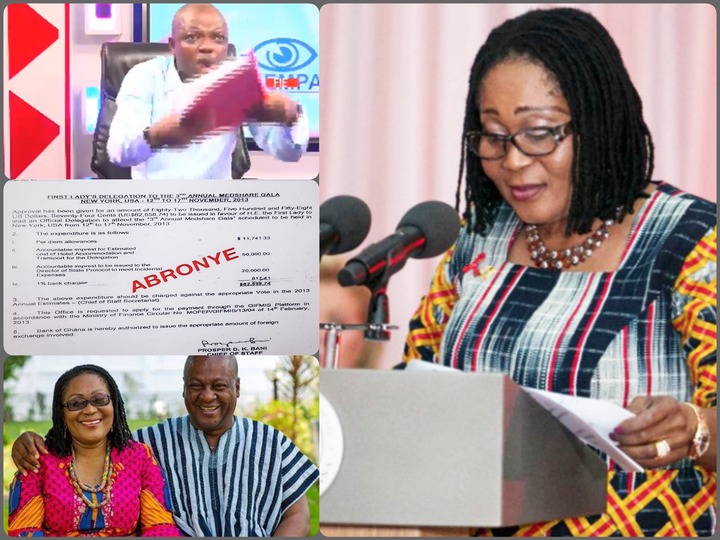 The former President, John Dramani Mahama has been threatened with a legal action by the Bono Regional Chairman of the governing New Patriotic Party (NPP), Kwame Baffoe Abronye over the payment of some allowances and other benefits paid his wife, Lordina Mahama whiles in government. Abronye argues that ex-president Mahama’s claim that any payment made to spouses of Presidents and Vice Presidents are in breach of Article 71 of the 199 Constitution, renders all allowances and or salaries paid Lordina Mahama unlawful hence the need for him to refund them with immediate effect.

According to him, there are evidence of some $82,556 that was paid to the former First Lady [Lordina Mahama] in 2013 to participate in an annual MedShare gala. He thus shared evidence of the said payment; a copy of a letter authorizing the payment of that amount to Lordina Mahama.

He argued that such evidence and others [which he promised to share latter] proves the ‘hypocrisy’ of the former President had attached to public discourse on the subject of the recommendations made by the Prof Ntiamoa-Boadu Committee on the emoluments for Presidential Spouses. In respect of which, Abronye is demanding that all monies received by the former First Lady be refunded to state coffers lest he would file a legal action against her and John Mahama.

“Mahama must answer this. Why should the state pay his wife, Lordina for her travels to participate in that gala? He must answer this lest refund all the monies paid to the wife. He must be ready before I take him to court.

“I will cause him to refund this $82,000 and any others paid the wife when they were in government. I will go to the Supreme Court to challenge these payments,” he said.

Abronye charged that John Mahama references page 61 of the committee’s report to learn about the payment of emoluments to Lordina over the period 2009-2017 when the NDC administration was in office.

“Mahama and Lordina Must read page 61 of the report. Your wife was being paid, so has been indicated by the committee. Such hypocrisy must stop. The committee’s report even exposed you. They indicated that your wife, Lordina was paid by the state.

“Stop seeking faces when an issue arises. Perhaps you have not read the report. Go and read it together with your wife. You will find the detail in page 61 of the committee. The committee had stated clearly that you took those emoluments over the eight year administration of the NDC, ” Abronye added.

He intimated that he will personally see to it that John Mahama and Lordina Mahama are compelled the law to refund those monies, given that there are no legal basis for it.

Public Workers Should Pay 4% and Ministers 79% for Cathedral: Coalition of Citizens Not Spectators