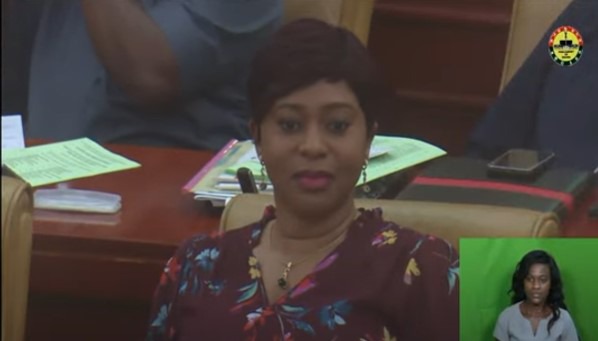 The Member of Parliament for Dome/Kwabenya Constituency, Sarah Adwoa Safo was given a rousing welcome in parliament this afternoon as she walked majestically to her seat. She was full of smiles as she gave the Majority Leader of Parliament, Osei Kyei Mensah a fist to register her presence in the chamber.

The drama that unfolded with her presence interrupted a submitting that was being heralded by the Minority leader, Haruna Iddrisu. He managed to calm the excitement of his colleagues in the Majority by acknowledging the presence of Honourable Adwoa Safo.

She rose from her seat and waved at her colleague parliamentarian when Haruna Iddrisu mentioned her name. Undoubtedly, she was informed about the suspicions the Minority, especially the North Tongu legislator, Samuel Okudzeto Ablakwa, have about her presence in parliament yesterday when the 2022 Budget Statement and Economic Policy was approved.

The allegations were that she was impersonated by some other woman. The Minority has threatened to cause an investigation into this, even to an extent that they will demand the boarding pass of the Dome/Kwabenya legislator whom they believed hadn’t arrived in Ghana at the time. 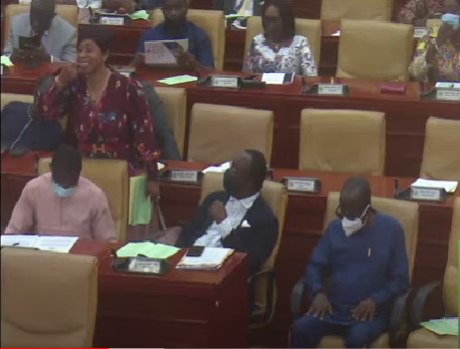 Today, the chamber of parliament was electrified as the majority hail their colleague [Adwoa Safo] whose identity had sparked the curiosity of the Minority since yesterday. Even for some parliamentary correspondents, the looks on the woman who appeared in parliament in the name of the embattled MP was highly unrecognizable and suspicious.

Hon. Adwoa Safo was not in a nose mask when she walked into Parliament, and this was strictly a direct message to defuse allegations the Minority have articulated. She was confident but had lost much of her weight.

She has been out of the country for over two months, and it is believed that she is undergoing some serious medical procedures. The controversy about the impersonator could have been settled if we have a sophisticated imagery system to analyze the posturing and physique of the alleged imposter and the MP herself.