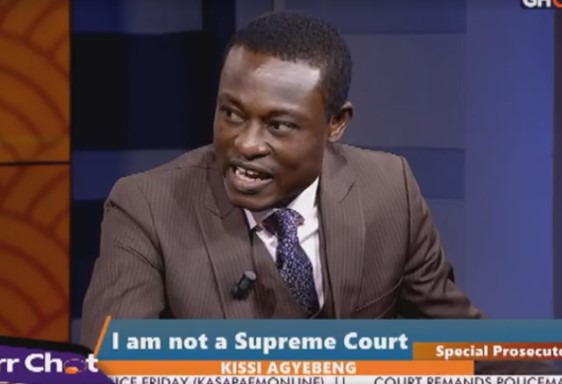 The Special Prosecutor, Kissi Agyebeng has hinted that his office would by October line up corruption cases involving public officials for prosecution. According to him, some substantial work has been done that convinces him that the Office of the Special Prosecutor is finally up for action.

In an interview, he granted on Starr Chat with Nana Aba Anamoah, the Special Prosecutor his office has been occupied with reviewing cases that had been filed by his predecessor for the necessary actions to be taken on them. Mr. Agyebeng added that upon assuming office since his appointment by the President, he has been inundated with petitions, with his daily average being four.

He however believes that given a little push, in terms of human resources and logistics, the Office of the Special Prosecutor would be able to prosecute cases that had long been pending. Mr. Agyebeng emphasized that the cases at his desk that would be rolled out by October are varied yet of public interest.

He thus urged Ghanaians to have confidence in his office in dealing with corruption and corruption-related offences that have been reviewed, while they keep receiving more cases.

"From 5 August till now, what I have been doing is a review of all the cases. Some people have criticized me for not acknowledging their letters. But they will all be acknowledged.

"I receive on average 3-4 petitions in a day...from October, we are going to roll them out. And these cases cut across."

OSP To Go After Corrupt Private Organisations and Individuals

Mr. Kissi Agyebeng emphasized that the mandate of the Office of Special Prosecutor is not limited to public officials and politically exposed persons. He clarified that private sector organisations and individuals are equally subjected to the law and shall be prosecuted when a case is filed against them.

He thus advised that Ghanaians equip themselves with the legal provision, stressing that such knowledge is critical to having a collective effort waged at combating corruption in Ghana.

"We all have been fixated on public officials as if those in the private sector are corrupt-free. But the framers of the act and the legislative instrument supporting it saw it wise to open it up to cover everybody including private companies," he explained.