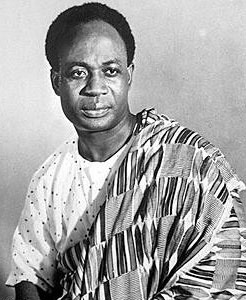 I careless about who he was or how people see him today in the Ghanaian society. Most people would tell you the good side of President Nkrumah.

I would like to add the opposite side of what most people think about him. His Government was corrupt as most successive Governents. He gave away 10 Million GH Pounds to Guinea. Which cleary show his lack of financial discipline which Gbedemah (founder and chairnan of the then CPP Party) criticized.

Most of the actions he took were self centered interest. An amount of 5 million Dollars is said to have been found in secret account belonging to the the formal president.

In 1962 a grenade was thrown at President Nkrumah. After he recovered from his injury he had about 500 people arrested and detained indefinitely. He requested Parliament to pass the Preventive Detention Act, allowing the government to detain anyone without trial for any reason. Nkrumah also thought that it was Tawia Adamafio and his colleagues who had attempted to assassinate him. They were tried for treason, but were not found guilty. Nkrumah became angry and influenced Parliament to pass a law to enable him to set the verdict aside. New judges were appointed to retry them and they were found guilty and sentenced to death. Nkrumah commuted the death sentences.

In April of 1965, there was an assassination attempt on the president of Niger and President Nkrumah was accused of the sponsor of the plot. President Nkrumah denied the allegation and claimed that it was all part of western plot. However, President Felix Houphouet-Boigny of Ivory Coast challenged Nkrumah's denial and released evidence of guerrilla training camps in Ghana staffed by Chinese Communist instructors. Further, at a meeting of the foreign ministers of the Organization of African Unity in June 1965, Nkrumah through his representative, tried to divert criticism, but Niger representative released evidence showing seven guerrilla training camps operating in Ghana with Chinese and East German instructors, as well as further evidence showing that the terrorist that carried the abortive assassination had been trained in Ghana. It appears from the above information that President Nkrumah trained guerrillas not only to terrorise Ghanaians, but also to use them to sponsor terrorism across Ghana boards. This action clearly breached international laws and also made mockery of his active involvement in Pan-Africanism and his goal to have Africa as a one united country. In fact, one of principles of OAU was non-interference in the internal affairs of another member's country.

President Nkrumah also practiced nepotism as he did not include some major ethnic groups in his cabinet, particularly, in the later part of his government.

Practically, President Nkrumah was a visionary man and was able to built infrastructures because government was able to generate money for the then Gold Coast. Though the British left money for the country, and as to how much it was I can't tell. The Fallacy Of Britain Leaving Huge Sums Of Money For Kwame Nkrumah's Government

Though it is true he attained independent for Gold Coast, he did not do it all alone. And I always wonder what would have happened to Ghana if he did not build the Akosombo dam.