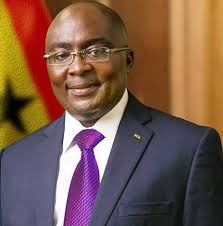 The calls from the nooks and cranny of Ghana for the ever most industrious, illustrious and intelligent vice president in the history of Ghana. His eminent and timely enthusiasm is not only noticed in Ghana but also in Africa and by extension the global political spectrum.

We as concern as we are as diehard and staunch members of NPP in the Sakogu zone of Nalerigu-Gambaga constituency have therefore seen the urgency in the need for the current vice president to put himself up for the 2022 NPP presidential primaries for consideration. As his boss would be going on a constitutional retirement on 7th of January, 2025.

Our call is borne out of the fact that Dr Bawumia has been very pivotal and instrumental in the current success stories of Ghana. Ghana has actually become the beacon of optimism in the African continent over the years under the sole auspices of the vice president as the team leader of the nation's economic management. Dr Bawumia's assumption as a vice president has made that office attractive and admirable to the extent that even the international community has come to the firm believe and conclusion that the vice president deserves to be elevated to the highest office of the land. Our unflinching support for the brainy and intelligent and most successful young man of our time is not because he is a northeasterner or because of his ethnic extraction. We just think that it will be a waste of eight years to commit this nation in to a wasteful hands like John Mahama and his terrible NDC. And the only way we can be safe from that quagmire of slavery is to first and most necessarily go for Dr Bawumia as our best bet for flag bearership in 2022.

The man we are talking about is the vice president that has not had a scintilla of corruption tag on himself throughout his four years as a vice president from 2016. Unlike other vice presidents in the past who masterminded dubious purchases of airbuses and other related corrupt activities. Dr Bawumia is the vice president we have had in this country whose prowess and credentials as an economist and a financial person is unmatched and all attempts to present alternative persons from the other side of the political divide to match him have proven futile.

The vice president has won the admiration of many in the area of bringing the understanding of basic economic rudiments to the doorsteps of every Ghanaian through his unprecedented lectures on the economy on various platforms both within Ghana and the diaspora. Dr Bawumia happens to be the fastest learner of politics any political watcher can vouch for. This man when he was first appointed in 2008, many people saw him as a novice in the political industry. But today as we speak, he is the most politically experienced individual as far as contemporary politics of Ghana is concerned.

Dr Bawumia has earned the respect of Ghanaians especially after the 2012 election dispute in court when he mounted the witness box as the star witness of the petitioners. His eloquence, tolerance of vituperative questions from the then councils of the respondents, and his calmness made him to have control over how he handled the most vitriolic cross-examinations. This is why every ethnic group in Ghana and even beyond has resorted to naming at least, one child after Bawumia in their families. His name has unambiguously become a household name in Ghana and beyond. When his father(Alhaji Mumuni Bawumia) passed on in 2002, may his gentle soul rest in perfect peace, the name of that most important family in Northern Ghana nearly died off. It was the emergence of this handsome, intelligent and learned young man that resurrected the name of that reputable family.

We are not perturbed by the planting of some youth in Northern region by the NDC and calling them concern youth of Northern region to come out and attempt to disparage the vice president for their selfish gains. All those guys need to know is that the majority leader is the embodiment of 138 members of Parliament in Ghana. Therefore, whatever he says has a heavyweight in our party. The said group is one of the most useless group ever to have been formed and aligned themselves to a respectable party like the New Patriotic Party. If they were logical, they would have been aware that Mr Osei Kyei Mensah Bosu who made that objective statement himself is an Akan. And each of the members of that group can bear with us that the majority leader can be a presidential material and could have presented himself. They should be aware that if he had any vice presidential ambition, he wouldn't have said Mr Alan Kyeremateng could be a good vice presidential candidate to any non Akan presidential candidate. As for Mr Boakye Agyarko, well, he is entitled to his opinion. But to go ahead and rain insults on the majority leader for stating the bare facts is most unfortunate and reprehensible. The majority leader is more relevant than him in NPP. He is on record as the first and only minister under Akufo Addo's government to have been asked by his boss to resign his position because of certain skirmishes that involved him. So what is talking about? The group that calls itself 'concerned Northern Youth of NPP' is uncharacteristic of NPP because, groups in NPP are not known for maligning their leadership in Parliament. The said group is an NDC appendage because it is NDC that is noted for castigating their leadership of the second most important institution of the land. We were all in this country when their national communications officer came out and bastardized their minority leader, the minority chief whip and the speaker of Parliament. And for which reason, was applauded and eulogized by the rank and file of their party.

In conclusion, concerned youth of Sakogu are poised to go through thick and thin to make sure that Dr Bawumia emerges and emerges deservedly as the next presidential candidate of NPP and eventually wins as our next president of Ghana.

Elections: Our Collation is base on 3 key principles - Mr. Mac Manu

#FixTheCountry Campaign - Trending Photos Of The Poor Condition Of The Economy