It is said "Monkeys Play By Sizes" and so is the case of the current Ghanaian President, Nana Addo Dankwa Akufo-Addo and Rebecca Akufo-Addo.

Well for those who may not know, President Akufo-Addo 's father, late Edward Akufo-Addo was also President of Ghana. He was President in the 2nd republic from 31st August, 1970 to 13th January 1972. Edward Akufo-Addo was a lawyer and politician who became a Justice of the Supreme Court. He was appointed Chief Justice from 1966 to 1970 by the National Liberation Council (NLC) regime. He was also Chairman of the Constitutional Commission which drafted the 1969 second Republican Constitution, and also a member of the big six leaders of the United Gold Coast Convention (UGCC). He died in 1979 at age 73.

Well his son Nana Akufo-Addo took after him after a third attempt at elections and eventually won to become president from January 7, 2017. 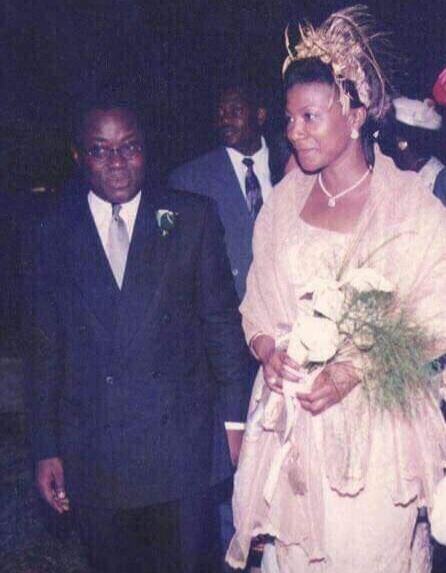 But it doesn't end there because the wife of the President, Rebecca Akufo-Addo born Rebecca Naa Okaikor Griffiths-Randolph is the daughter of Ghana's former speaker of parliament during the 3rd republic.

Jacob Hackenburg Griffiths-Randolph, an Anglican was selected to be Speaker under the Limann administration. Prior to being in this position, the Ghanaian judge was Ghana's first ever Commissioner of Income Tax under the Nkrumah government. After Adisadel College where he had his secondary education, he worked at the John Holt Trading Company where he rose to become Regional Manager. He left for England where he completed his legal education at the Inner Temple in 1952 after which he returned to Ghana. He died in 1986 at age 71. Nana Akufo-Addo born (William Akufo-Addo) and the first lady popularly called Auntie Becky got married on April 12, 1997. Next year will be the 25th marriage anniversary of the couple. They are parents to five daughters.

Well like the saying goes, the rich and influential marry themselves.

What are your thoughts? Please leave them in the comment section.