By Beauty (self media writer) | 3 months ago 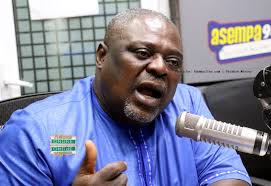 News coming from Peace FM online claimed that former Deputy General Secretary of the opposition National Democratic Congress (NDC), Samuel Koku Anyidoho has called the bluff his expulsion letter from the party signed by the General Secretary, Johnson Asiedu Nketia but Ghanaians have reacted massively that, he should count himself out of NDC.

According to peace FM online, the Founder and Chief Executive Officer of the Atta Mills Institute said he remains a loyal member of the opposition National Democratic Congress (NDC) as he has not received any letter of dismissal from the party.

However, peace FM online stated that Koku Anyidoho speaking on Okay FM’s Ade Akye Abia Morning Show for the first time on his expulsion from the NDC noted that even though he has heard in the air that he has been sacked from the NDC, he ignored it until he heard the General Secretary of the party kept giving voice to it.

"I was going to ignore it until the General Secretary kept giving voice to it and mentioning my name and making reference to my working relationship with President Mills at the Presidency; making certain insanely comment about my relationship with the President when he was not there. I have evidence of what the General Secretary said about me and all those documents are with my lawyers", he fumed.

Ghanaians reacting to the news stated that "You're a member of Atta mills institute not NDC."

Another Ghanaian told him that "stop dreaming boss. If they don't need you, is it by force to join them?"

"If he's a man enough he should come near anything NDC and he will see his smoothness level. Abusfusem" another person said.

See some reactions below.

Content created and supplied by: Beauty (via Opera News )