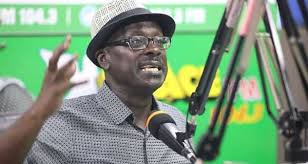 One of Ghana's prolific law heavy-weight Professors Kwaku Azar has wisely delved into the current happening in parliament as majority and minority caucus faces-off with each other on the acceptance of the proposed 2022 budget.

He believes there's a better way in handling this circumstance than what is currently been exercised by both majority and minority in parliament.

This is what he had to say:

The 1981 budget was rejected by a vote of 54-51.Justt before the voting, the chamber doors were closed, as required by the rules, preventing 3 PNP members from entering the chamber.

The PNP did not accuse Speaker Griffiths-Randolph, father of Auntie Becky, of bias for locking the chamber hall. The 3 PNP members did not cause any commotion when the door was locked.

Rather, President Limann accepted the outcome, immediately scheduled a series of meetings with MPs from all sides, other stakeholders,s and formed a joint committee to collate views to put together a revised budget.

The budget was rejected on June 30, 1981. By 6th August 1981, a new budget was presented and approved. The new budget included all the essential aspects of the old except it eliminated the unpopular hospital fee and tax on imported vehicles.

The matter was resolved. The budget was approved. Parliament emerged as an independent branch of government that could reject the executive’s budget. The President burnished his liberal credentials.

This is in sharp contrast to what is happening today where MPs are activating the nuclear option, at will, and paving the way for gridlock and mutually assured destruction (MAD).

There has to be a better way!

The numbers in the 8th Parliament do not support a majoritarian rule. It will simply not work. We must seek consensus building.

The uncertainty surrounding the budget is not good for Ghanaians and must be resolved by the statesmen.