Some hidden secrets about spiritual warfare that ensued between Prophet Owusu Bempah and Nigel Gaisie have been uncovered today. The founder of Prophet Hill Chapel, Nigel Gaisie on Onua TV confessed that the two were fiercely fighting each other to defend their prophecies about who becomes President of Ghana in the 2020 electioneering period.

He indicated that Prophet Owusu Bempah is very powerful and managed to wrestle his prayers to defend his prophecy before God. Nigel Gaisie clarified that his loss does not mean a defeat by a manifestation of the will of God.

He told Captain Smart that there were some forces in the spiritual realm about the two main candidates; President Akufo Addo and John Dramani Mahama, to an extent that he suffered several attacks for what he said and did for the latter and the National Democratic Congress.

He indicated that no one should undermine the power Prophet Owusu Bempah has, adding that he kept seeing him in his dream and visions when he interceded for the NDC and John Dramani Mahama. Nigel Gaisie added that John Mahama was predestined to win but things change for something to manifest in God’s own will.

“We fought fiercely. It was in the spirit. He is really powerful and a senior prophet but that doesn’t make me a junior one,” said Nigel Gaisie. 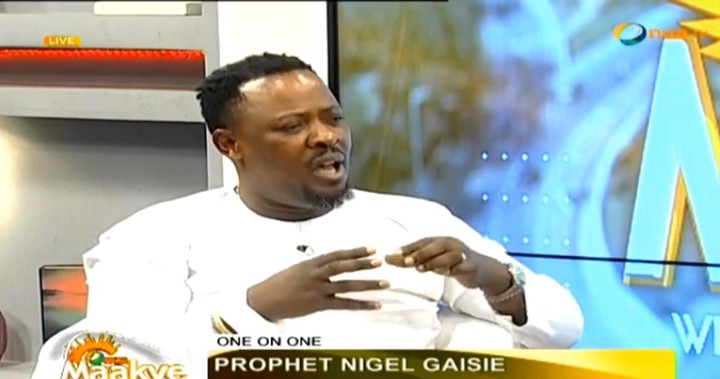 He argued that for a person who is that anointed and to have made priceless sacrifices for the government and the ruling New Patriotic Party (NPP), anything he says could hurt them. He emphasized that the NPP would have been in p=opposition by now if not for Prophet Owusu Bempah.

“If not for Owusu Bempah those people will be in court.”

Prophet Nigel Gaisie learned that Prophet Owusu Bempah’s arrest and detention has enlightened him. He stressed that like himself who have made great sacrifices and suffered humiliation at the hands of some Ghanaians, such could have been his fate if the NDC were in power.