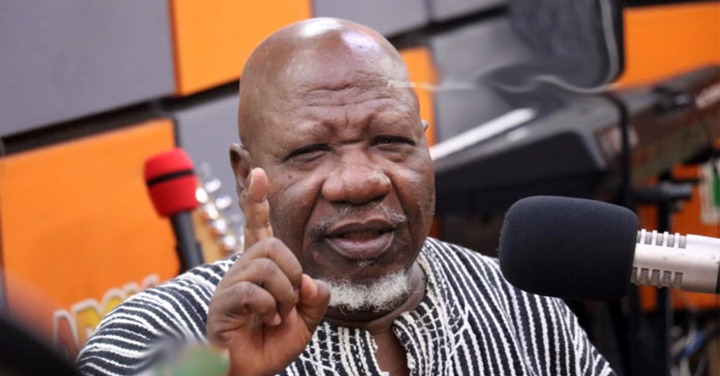 Former Central Region Chairman of the National Democratic Congress (NDC), Mr. Allotey Jacobs has indicated that he is unperturbed by several allegations suggesting he budgeted an amount of one hundred and fifty thousand Ghana cedis for meat pie.

According to Mr. Allotey Jacobs who is now a social commentator, he was able to mobilize supporters to fill the entire stadium for the NDC to launch its campaign.

Mr. Allotey Jacobs indicates that a budget committee led by his then vice, Samuel Wilberforce was formed to have oversight responsibilities of all monetary allocations. He add that the former Central Region Minister, Kwaku Ricketts Hagan was part of the committee.

He says John Dramani Mahama took the budget and issued out the money to Kwaku Ricketts Hagan. According to Allotey Jacobs, there was never an amount of one hundred and fifty thousand Ghana cedis for meat pie.

Allotey Jacobs in the studio of Happy FM

“I called the regional executives, and told them to form a budget committee. The regional minister was part of that meeting. So we took a decision that brought together all the budget for the program and Samuel Wilberforce who was then my vice led that committee.  So after the budget we decided to present to the regional minister for onward checks by executives in Accra. There was nothing like meat pie. I don’t know where that is coming from. I knew this day would come so I never involved myself in that budget.  We all went to the office of the then President, John Dramani Mahama. He was not even around but we waited. So John Mahama looked through the budget and sanctioned Julius Debrah to release money for us. So I told them to give the money to Ricketts Hagan and then he will also disburse the money through my vice, Samuel Wilberforce. That was it. I don’t even remember the amount that was in that budget”. He noted.

Allotey Jacobs indicates that the allegations are mere propaganda to stain his hard earned reputation. He adds that the Regional Minister later offered him 5,000 Ghana cedis for his expenses.

“Knowing their character. I knew there were shadows behind the scenes so I never prepared that budget, my deputy did. I did not go through that budget and told them I will not collect that money. But the Minister should pick the money and disburse them through the budget we have made. When the money came, he gave me 5,000 GHS and even with that I distributed it to party supporters who were available”. He added.