ThankGhana: You are an economist not an IT champions–Mahama to Bawumia.

By Lion_online (self media writer) | 16 days ago 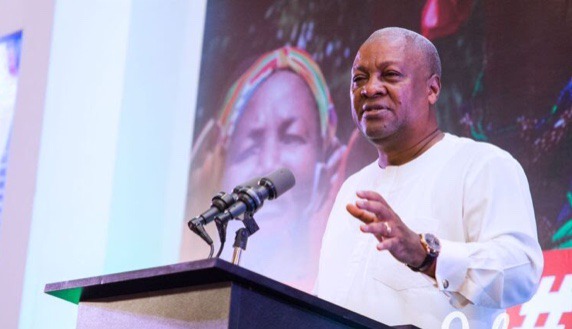 The program was held at the Kempinski Hotel, Gold Coast City, Accra. The former President touched on a number of issues on the economy, job creation, security, digitalization among others.

Firstly, He spoke about a lot of things he believes are hinderance to the development of the country. He spoke about the unforgettable lessons he and the opposition party, the NDC learnt from the 2020 polls.

In addition to that, he insisted that, the public sector was not full.

More importantly, Do not lose hope, instead, I encourage you to hope and work hard for mother Ghana. And a better future for a new administration in 2025,” he said.

He also criticized the Vice President Dr. Mahamudu Bawumia for touting himself as a digitalisation messiah.

Veep Bawumia is hiding behind the digitalization agenda over his bad performance in the economic sector.

It really surprises me on how the so-called economic messiah now turn himself into an IT champion”, he added.

He now digitalize everything”, he said. He even digitalize propaganda now”, he added.

The former president argued that governments over the years laid the necessary foundations to boost network infrastructure in the country, hence one government cannot lay claim to being the brain behind Ghana’s digitalisation drive.

Content created and supplied by: Lion_online (via Opera News )

No salary for public sector workers. These are some bad effect on the rejection of the 2022 budget.

Video: Bride Causes Stir With Her Chakachaka Make Up On Her Wedding Day