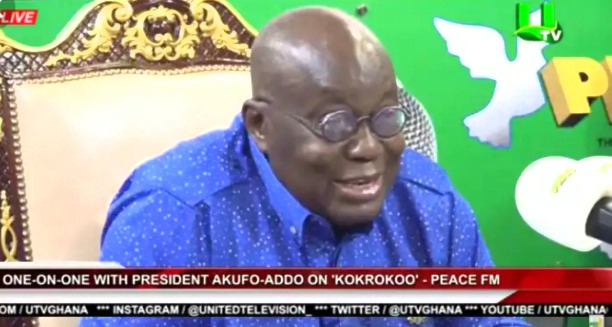 Many people have wondered why it took President Akufo Addo some days before making his justifications as to why he contradicted Dr. Mahamud Bawumia on the construction of a harbor at Cape Coast, and why he granted the interview on Peace FM and not on any radio station in the Central Region.

The former Chairman of the PNC, Bernard Ambataayela Mornah, has asked why President Akufo Addo allowed Kwame Sefa Kayi, who is his employee to interview him? According to him, it amounted to a conflict of conscience on the part of Kwame Sefa Kayi.

Bernard Mornah made this statement on 'Good Morning Africa' on Pan Africa television this morning, 22nd October 2021, when he gave his opinion on the interview President Akufo Addo granted yesterday on Peace FM.

According to Bernard Mornah, after Akufo Addo lied about their campaign promise to construct a harbor at Cape Coast, he resorted to doing damage control by granting an interview outside of Cape Coast, and in that interview, he chose his employee to interview him.

"You chosed your employee to interview you and to ask you questions, how is that possible? Akufo Addo has employed Kwame Sefa Kayi to be a board member, and he has come to him telling him to ask him questions."

Bernard Mornah indicated that if there is anything like a conflict of duty or conflict of conscience, Kwame Sefa Kayi should have said that "my President, you are coming to Peace FM on my show, let me stay off the show and let someone ask you the questions because I have an employer-employee relationship with you, so I may not be able to ask you some of the questions," but Kwame Sefa Kayi sat there and instead of asking probing questions, he was rather laughing.

Bernard Mornah revealed that President Akufo Addo has been lying, and in most instances, he has been misled. So, in this instance, he was misled.