It Is A Disappointment To All Ghanaians Not Only The President.

By Giinagh.com (self meida writer) | 27 days

There is a saying that all that glitters is not gold. In other words, the fact that something appears to be shiny does mean that light is reflecting on it. For all you know it might be a complete darkness and deception. But you would even appreciate this statement more if you drag it into the political landscape of Ghana with much focus on the Akuffo Addo led NPP government.

The manner in which the Akuffo Addo led government snatched power from their main rivals can make tears flow if you have quick emotions. Who would have expected that after Mahama left office in 2016, things will begin to deteriorate. Indeed we were convinced beyond any doubt that this country will be transformed in the next four years after president Mahama's exit from the Flagstaff House.

But lo and behold, the story is not something that will not be narrated but just being felt by almost every body in Ghana.

Even the previous military regimes, human massacre was the order of the day, innocent citizens did not suffer those heinous killings as compared to supposed modern democracy we practice Today. The president himself can attest to the fact that in a military regime, he could organize protest against a sitting government whose leader was military officer and could pull the trigger of the gun at any given chance yet no casualties were recorded in any of those many protests of which the president led some.

As Ghanaians were patiently waiting for the one district one factory initiative to supply us with jobs, our debt was rather ballooned; we are led into judgement debts including the unbridled borrowing by government without any tangible thing to show for it.

As we were waiting for Ghana's name to still be maintained at the top as the most peaceful country and the beacon of Democracy in the Whole of Africa, our security is being left loose where security protectors themselves are being attacked and killed.

As if that was not enough, the military who were supposed to be protecting citizens of the country can rather go on a shooting spree on harmless citizens with bullets that is bought by their own taxes.

And all these are piling into the history books of this country and one day it will be pronounced that Akufo Addo is the worst president Ghana ever had. And therefore, it will be a great shame not only on the president but also on the citizens who supported and campaigned for his style of governance. A word to a wise should be enough. 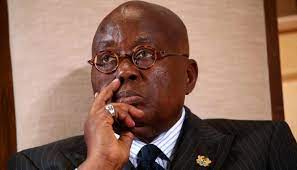