By GH_InformationCenter (self meida writer) | 26 days 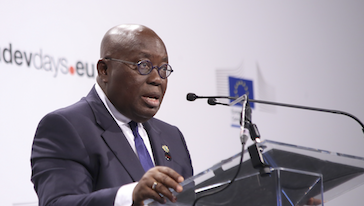 Kofi Asante Mensah who is the convenor of Concerned Youth Of Ghana has described the Galamsey National Consultative Dialogue as a waste of Ghana's resources.

His Excellency the President of the Republic, William Nana Addo Dankwa Akufo-Addo address at the National Dialogue on Small Scale Mining on Wednesday April 14, 2021 is a strong admission that he is not prepared and poised to fight the “galamsey” menace.

According to him, the comment should not and must not be taking frivolously, “I am determined to enforce the laws on illegal mining no matter the subject, high or low. I will, however, not act on hearsay or mere allegations without more. I will not hesitate to act though where is hard before the policy.

The questions are: what is the president’s definition of mere allegation or hard evidence? And does the President determine the strength of any evidence or allegation before the Ghana Police Service (a suppose Independent Institution)?

The president’s speech is a declaration that, anyone with information on his officials perpetuating any illegality should better go to bed with it.

What becomes of whistle blowing?

Nana Addo, then Presidential Candidate of the opposition NPP in 2012, promised to institutionalise and use the “Anas Principle” to combat corruption _“the measures are going to be difficult but there has to be a variety of them, including what I consider, what I call the Anas principle.

Setting up highly motivated professional groups of young people who will work if you like, undercover to unearth examples of corruption where ever they can find it.

And there allow the Authority to deal with the issue, is not only to unearth the corruption but you actually deal with it, in terms of sending people to courts prosecuting them, hopefully the courts will cooperate and make sure the offenders are found guilty and sanctions appropriately enforced. So, a variety of measures, but the key one is the Anas principle.

Mr. Akufo-Addo became successful in his presidential ambition in 2016 and when confronted with the fact that he must bring his appointees caught on camera indulging in acts of malfeasance and receiving illicit monies to book, in the Anas Aremeyaw Anas (Tiger Eye PI) undercover investigation titled “Galamsey Fraud (1)”, the President only dissolved the Inter-Ministerial Committee on Illegal Mining (IMCIM) constituted to oversee the implementation of the ban on all forms of small-scale mining.

Members of the IMCIM chaired by former Minister of Environment, Science, Technology and Innovation Prof. Kwabena Frimpong Boateng, are walking freely without any independent audit of their activities including the seizure of Excavators among others.

He further, exonerated Presidential Staffer and Secretary to the IMCIM, Mr. Charles Cromwell Nanabanyin Onuawonto Bissue and other culprits.

The only punishment for Chinese national Aisha Huang known as Ghana’s Galamsey Queen was to deport her, thanks to the Accra High Court.

We had the then Senior Minister Yaw Osaafo Marfo in a widely circulated video shamelessly justifying the decision, saying _“putting (Aisha Huang) in jail in Ghana is not going to solve your money problem. It is not going to make you happy or me happy”.

Considering the statement by the President, the so-called new measures to fight galamsay in Ghana is dead on arrival.

And the National Consultative Dialogue is nothing but another talk shop and waste of Ghana’s hard to found resources for Nana show boy to pursue his usual rhetoric.

At Home, Try This Garden Eggs Stew And Ampesi Recipe