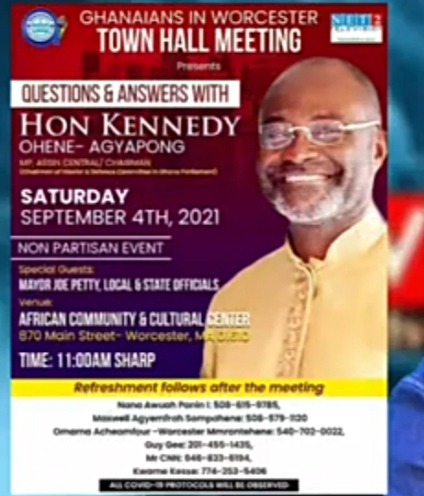 The Ghanaian community in Worcester in America is organizing a town hall meeting on 4th September 2024. It is meant to be a questions and answers section with Kennedy Agyapong with the Mayor of Worcester as the Special Guest.

The American-based Ghanaian investigative journalist, Kevin Ekow Baido Taylor, has thwarted the event by sending an email to the Mayor of Worcester, warning him not to attend the event because of Kennedy Agyapong, which the Mayor's office has obliged.

According to Kevin Taylor, he shot the Worcester Mayor's office with an email, and when he sent that email, he told the Mayor that Kennedy Agyapong is the prime suspect in the murder of the Journalist, Ahmed Suale. He is the same person who said on tv that people should go after another journalist called Erastus Asare Donkor.

He indicated that he sent the Mayor links to the stories and letters that US Congressmen have written about Kennedy Agyapong. He reminded the Mayor that he lives in a country where people's freedom is respected, and the rule of law is supreme.

"So, as a journalist and someone who has facts, I'm just telling him to protect his political career as the Mayor of Worcester, he shouldn't honor that invitation." 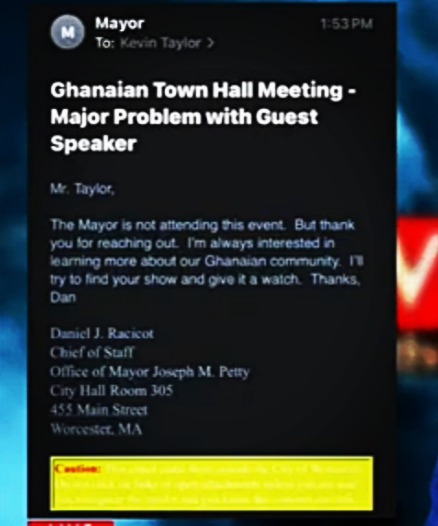 The Mayor read his email, and he knows the consequences of what Kevin Taylor has written to him. So, this afternoon before Kevin Taylor came on his show, the Mayor's Chief of Staff replied to his email, and this is what he said; " The Mayor is not attending this event. But thank you for reaching out. I'm always interested in knowing more about our Ghanaian community. I will try and find your show and give it a watch. Thanks."

So, the Mayor of Worcester will never share a stage with Kennedy Agyapong because he knows the consequences of what he has sent to him.

Kevin Taylor revealed that this is just the beginning, he knows the organizers will go ahead with the event, but they should expect a powerful demonstration over there. Kennedy Agyapong has committed crimes in Ghana, and he must be held accountable. 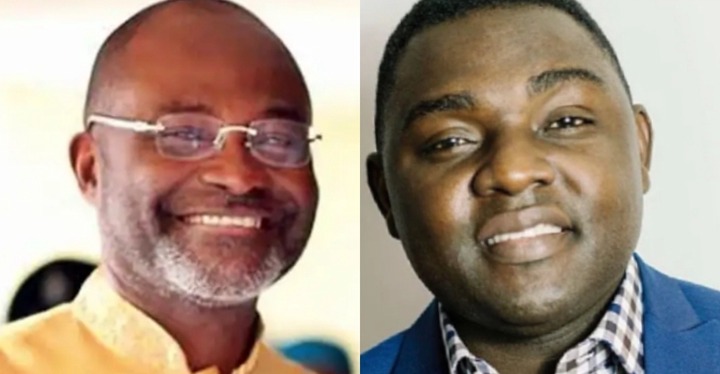 He said that America is a place where people have common sense. The Mayor has proven that he is intelligent, and at least he is ready to look at the facts and then make reasonable decisions. The Mayor is not attending that event because the email came from his Chief of Staff, and he will never share a platform with a criminal like Kennedy Agyapong.

He added that he is going to go after the organizers of that event. He will profile all of them, so they should make sure all their documents are intact.