The National Peace Council has intervened in the ongoing chaotic debate in parliament over the approval or otherwise of the 2022 Budget Statement and Economic Policy. The Council led by the Chairman, Rev Dr Ernest Adu-Gyamfi have engaged both leadership of the Majority and Minority in Parliament over this impasse, and he is convinced some consensus has been arrived at in getting a working budget for the next fiscal year (2022).

In a press statement issued today, the Chairman of the National Peace Council indicated that exclusive deliberations were held for each of the parliamentary caucuses to highlight concerns regarding the budget. This was followed with a joint meeting with leadership of the Majority and Minority to commit to dialogue so that this impasse would be addressed soon.

In furtherance of which, both sides have nominated representatives onto a twenty (20) member committee to dialogue on the matter and ensure that all concerns are addressed and a resolution passed towards the approval of the budget. The Peace Council noted in its release that it is imperative that both sides make some concessions, in the interest of the nation, so that the budget approval does not degenerate into unnecessary conflict. 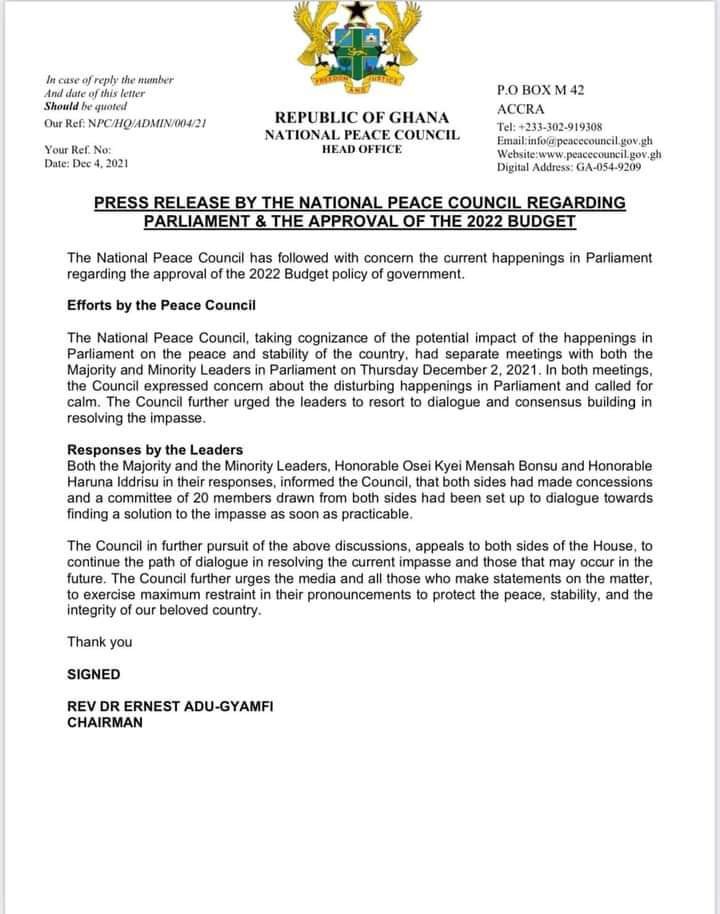 The 20-member committee is expected to conclude on its work as soon as practicable, perhaps before parliament goes on a recess. Any further conflict could exacerbate the situation and thus disrupt the government's operations for the coming year.

While this press release is being circulated, North Tongu legislator, Samuel Okudzeto Ablakwa hints that there are some troubling issues with the proposed Electronic Transaction Levy. He alleged that some shady deals are being hatched for a third party organisation in the mobilisation of this levy for the government.

The other argument which had been the major cause of conflict in the approval process is the call for the removal of the e-levy against a reasonable reduction in the rate being proposed. But neither of these considerations have received a welcoming consideration from the Majority.

On two counts, Parliament has ruled on the budget; the first of which resulted in the rejection of the budget, and then the approval of the same by the Majority. All these decisions have become a cause of heated argument between the parties, as each claims that the other acted unconstitutionally.

Some scholars and political analysts have suggested that the subject of the conflict be taken to the Supreme Court for mediation and interpretation. Both sides have given contradictory interpretations of Article 96 and 104 of the 1992 Constitution which dictates the rights and other considerations, not the Speaker, and the numbers required in parliament in taking a decision, respectively.

Proponents of this call include, Prof Kweku Asare, Kofi Bentil of IMANI Ghana, and Kweku Baako. They fear that leaving this hung parliament to rely on their versions of interpretation of the law could riple into regrettable consequences.