By L-Update (self media writer) | 7 months ago 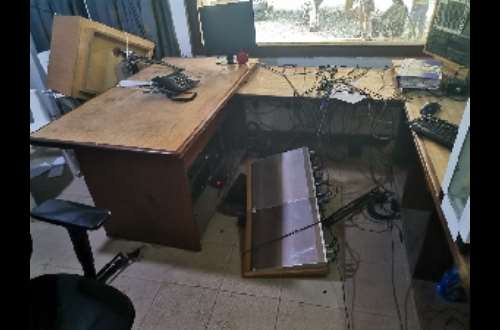 The party says it is barbaric.

Some masked, heavily-built men on Thursday morning attacked Radio Ada, a community radio station at Ada Foah in the Greater Accra Region, and ransacked its on-air studio without provocation.

The raid followed persistent warnings to the station by some chiefs in the area, to stop their broadcasts on a project being spearheaded by businessman Daniel McKorley (McDan) which involves the Songhor salt lagoon.

After learning of reports of the attack, the NDC Greater Region has issued a statement stating that this and many others “is taking a notorious dimension under this government to have media houses suffer one abuse or the other for being critical of the government.”

The party stresses that this cannot be acceptable in any civilized democratic society.

According to the NDC Greater Accra Region, it’s view is that the attack on Radio Ada and other media personnel in recent times is an irony under a government that touts the credentials of democracy, of which media freedom is a critical component.

For this particular attack on Radio Ada, the NDC wants government to, as a matter of urgency, commission an independent investigation into the matter and possibly bring the perpetrators of such a heinous crime to book.