It Is Inimical To Ghana's Development– Kwasi Pratt Tells Akufo-Addo Veteran journalist and the Chief Editor of the Insight Newspaper, Mr. Kwasi Pratt Jnr tells President Nana Addo Dankwa Akufo-Addo and the New Patriotic Party (NPP) government on Good Morning Ghana show on Pan-African Television on Saturday morning, that some statements relating to the level of development in Ghana under their tenure of office is simply uncalled for and rather unprecedented.

According to the outspoken journalist, the comments coming from President Nana Akufo-Addo himself, Vice President Dr Mahamudu Bawumia and other bigwig members of the party such as the National Chairman, John Boadu and the ministers is not the best compared with what has been promised Ghanaians.

Kwasi Pratt said that the level of criticisms mounted on the erstwhile John Dramani Mahama's NDC administration was enormous with a whole lot of words which purported to describe the kind of leadership they were offering to this country. To him, they used such words/statements as "incompetent Mahama administration," "we don't eat infrastructure," "bad economist," and other forms of destructive criticisms. This only tells one thing, that John Mahama's government was nothing worth comparing. 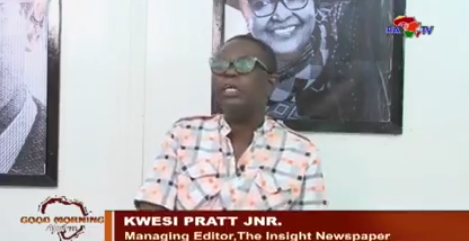 However, he is shock to the bones to hear statements that purports to compare the performance and achievements of this government, which is being criticised as well, to that which they themselves [the NPP] described as 'Incompetent'. He sees no reason why such should be condoned in the first place.

"We were in this country during Former President John Dramani Mahama's tenure of office when the then opposition NPP criticised them saying that they are incompetent and incapable of managing the economy. However, I am shocked to the bones when I hear these same people comparing their performance standards to an incompetent one. This is inimical to Ghana's development. They should compare their achievements to that which they think was competent enough and stop comparing it to Mahama's."