The five Worst president in Africa

By KwadwoSarfoGh (self media writer) | 5 days ago 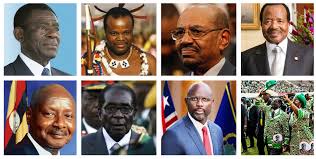 Good governance is gaining ground in Africa. It’s happening at snail speed, but it’s happening nevertheless. African leaders are becoming increasingly democratic and are recording significant progress in liberalizing the political environment. They are more accountable to their citizens, and showing more respect for human rights and civil liberties.

Teodoro Obiang Nguema Mbasogo is Africa’s longest serving ruler. He has ruled Equatorial Guinea, a tiny, oil-rich West African country, since August 1979 when he overthrew his uncle, Francisco Macías Nguema, in a bloody coup d’état. Equatorial Guinea is one of the continent’s largest producers of oil and has one of the highest per capita incomes in the world, but this doesn’t necessarily translate into prosperity for its people. The country ranks very poorly in the United Nations human development index; the vast majority of Equatorial Guineans hardly have access to clean drinking water. The country also has one of the world’s highest under-5 mortality rates: about 20% of its children die before the age of five. Many of the remaining 80% of the children don’t have access to quality educational and healthcare facilities. Meanwhile, the first son of the president, Teodorin Obiang (who is in line to succeed his father), spends millions of dollars of state funds financing his lavish lifestyle which includes luxurious property in Malibu, a Gulfstream jet, Michael Jackson memorabilia and a car collection that could easily make billionaires go green with envy.

José Eduardo dos Santos is Africa’s second longest serving president. He took the reins of power in September 1979 following the natural death of his predecessor Agostinho Neto. To his discredit, Jose Eduardo has always run his government like it’s his personal, privately-owned investment holding company. His cousin serves as the Angola’s vice president, and his daughter, Isabel Dos Santos is arguably the wealthiest woman in the country. Angola is extremely resource-rich. According to the United States Agency For International Development (USAID), the country is the second-largest oil producer in sub-Saharan Africa and the seventh-largest supplier to the United States. Angola also has massive diamond deposits and occupies an enviable position as the world’s fourth largest producer of rough diamonds

But for all its resource wealth, the vast majority of Angolans still live in the most horrid socio-economic conditions. 68% of the country’s total population lives below the poverty line of $1.7 a day, while 28% live on less than 30 cents. Education is free, but it’s practically worthless. Most of the schools are housed in dilapidated structures and there is a severe deficit of skilled and qualified teachers. According to the U.N. Children’s Fund, 30% of the country’s children are malnourished. The average life expectancy is about 41 years while child and maternal deaths are extremely high. Unemployment levels are very high. But José Eduardo dos Santos is unaffected. Rather than transforming Angola’s economic boom into social relief for its people, he has channeled his energies towards intimidating the local media and diverting state funds into his personal and family accounts. Dos Santos’s family controls a huge chunk of Angola’s economy. His daughter, Isabel Dos Santos has amassed one of the Angola’s largest personal fortunes by using proceeds from her father’s alleged corruption to acquire substantial stakes in companies like Zon Multimedia, a Portuguese media conglomerate and in Portuguese banks Banco Espírito Santo and Banco Português de Investimento among others.

Many Zimbabweans seem to think Mugabe is doing a stellar job. The country is on an economic rebound after several years of decline. GDP growth in 2011 was over 7% and the Southern African state has experienced single-digit inflation since 2009. The country’s agricultural sector is fast recovering after years of food shortages fueled by disruptions caused by Mugabe’s infamous seizure of white-owned commercial farms. Mugabe’s government has also recorded significant achievements in education as a result of extensive teacher training and school expansion projects: At over 80%, the country has one of the highest literacy rates in Sub-Saharan Africa.

But Mugabe’s inadequacies overshadow his achievements. For one, he has failed to deal with the ever-present problem of employment. The country’s high literacy rate does not necessarily translate into employment opportunities for its people. Zimbabwe’s unemployment rate is the highest in sub-Saharan Africa: it’s over 60%.

Despite entering into a power-sharing agreement with the former opposition party, the Movement for Democratic Change (MDC), Mugabe still wields almost total control over government institutions – a feat he has been able to achieve through his use of violence and subjugation. He remains reluctant to allocate substantial political powers to the MDC, and human rights abuses in the Southern African country are rife. The 87 year-old megalomaniac has vowed not to step down despite having ruled the Southern African state for over 24 years. He is seeking re-election in the country’s presidential polls slated for later in the year. Analysts expect the election to be besieged by fraud as the previous one.

Sub-Saharan Africa’s last absolute monarch presides over a country which has one of the world’s highest HIV prevalence rates: ver 35 percent of adults. Its average life expectancy is the lowest in the world at 33 years; nearly 70 percent of the country’s citizens live on less than $1 a day and 40 percent are unemployed. But for all the suffering of the Swazi people, King Mswati has barely shown concern or interest. He lives lavishly, using his kingdom’s treasury to fund his expensive tastes in German automobiles, first-class leisure trips around the world and women. But his gross mismanagement of his country’s finances is now having dire economic consequences. Swaziland is going through a severe fiscal crisis. The kingdom’s economy is collapsing and pensions have been stopped. In June last year, the King begged for a financial bailout from South Africa, and the country is at a dead end, so badly that it recently announced its withdrawal from the 2013 Africans Nations Cup, citing lack of finances as the principal reason.

Sudan’s President seized power in 1989 in a bloodless military coup against the government of Prime Minister Sadiq al-Mahdi- a government which was democratically elected by the people of Sudan. Soon after seizing power, Al-Bashir dispersed all political parties in the country, disbanded the country’s parliament and shut down all privately-owned media outlets. His reign has been characterized by a civil war in which over one million have been killed, while several millions have been displaced. Al-Bashir is still wanted by the International Criminal Court for instigating crimes against humanity, particularly in directing and funding acts of violence against the Southern Sudan. Famously corrupt, a diplomatic wikileaks cable revealed that Al-Bashir likely siphoned some $9 billion of his country’s funds into his private bank accounts in the United Kingdom.