President Nana Addo Dankwa Akufo-Addo is touring the country as he takes his tour to Cape Coast in the central region. Before elections takes place last year, the NPP government promised the people of central region that they will build a harbor and airport for them and it became a serous argument between NDC and NPP party members.

A lot of people believe then that president Nana Akufo-Addo and Dr Bawumia are listening leaders when they were able to implement Free SHS policy despite struggling a bit.

Today, when President Nana Akufo-Addo enters central region, he was asked about the harbor his party promised to build for the people of Cape Coast but he denies it by saying that he and his party rather promised to build a landing sites which shocked Ghanaians.

Many are in awe as to whether President Nana Akufo-Addo knows that the harbor promised can found in their 2020 manifesto. 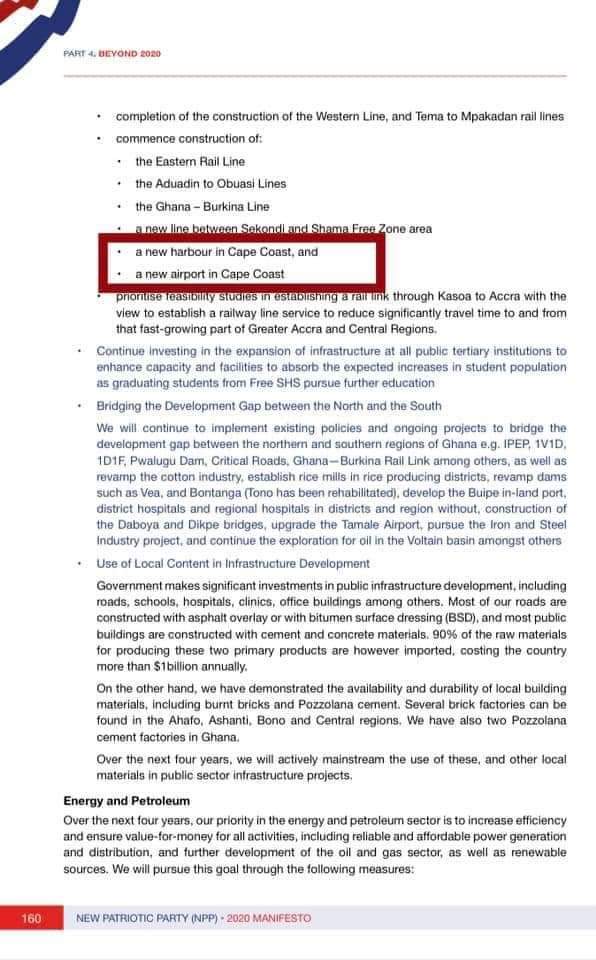 Due to that political activist kwame Asare Obeing A-Plus has disclosed the promised made by Dr Bawumia in last year and NPP manifesto telling Ghanaians that they will build harbor in Cape Coast.

Ghanaians are surprised to see that happened and stated that all what NPP promised them is a scam. According to them, seeing president Nana Akufo-Addo denying their own promised indicates that they just lied their way to Power as NDC told them.

"Achievement achieved no more yawa for opana 😆 all was scam" someone stated.

"Bro this our President don't know anything about what's in the manifesto. Family and friends business and bathing in the luxurious plane he dey think of. Charlie save your breath" someone told A-Plus.

"The Ghanaian politician knows that they can lie their way to power and no one will hold them accountable. That’s why the country is in such a state" someone fumes.

Some people tries to defend Akufo-Addo by saying that two things Akufo-Addo is trying to explain; 1. Bawumia said it so he should be ask when he comes to campaign for 2024. 2. Bawumia is not important in the scheme of things so he did not know what he was saying. "Either way the Vice President is not honest and serious" the person added.

See some reactions below.

The NPP could have chosen a better chair than Ahenkorah; Kojo Twum descends on the Tema West MP

Meet Andrea The Most Beautiful And Curvaceous Model Online.